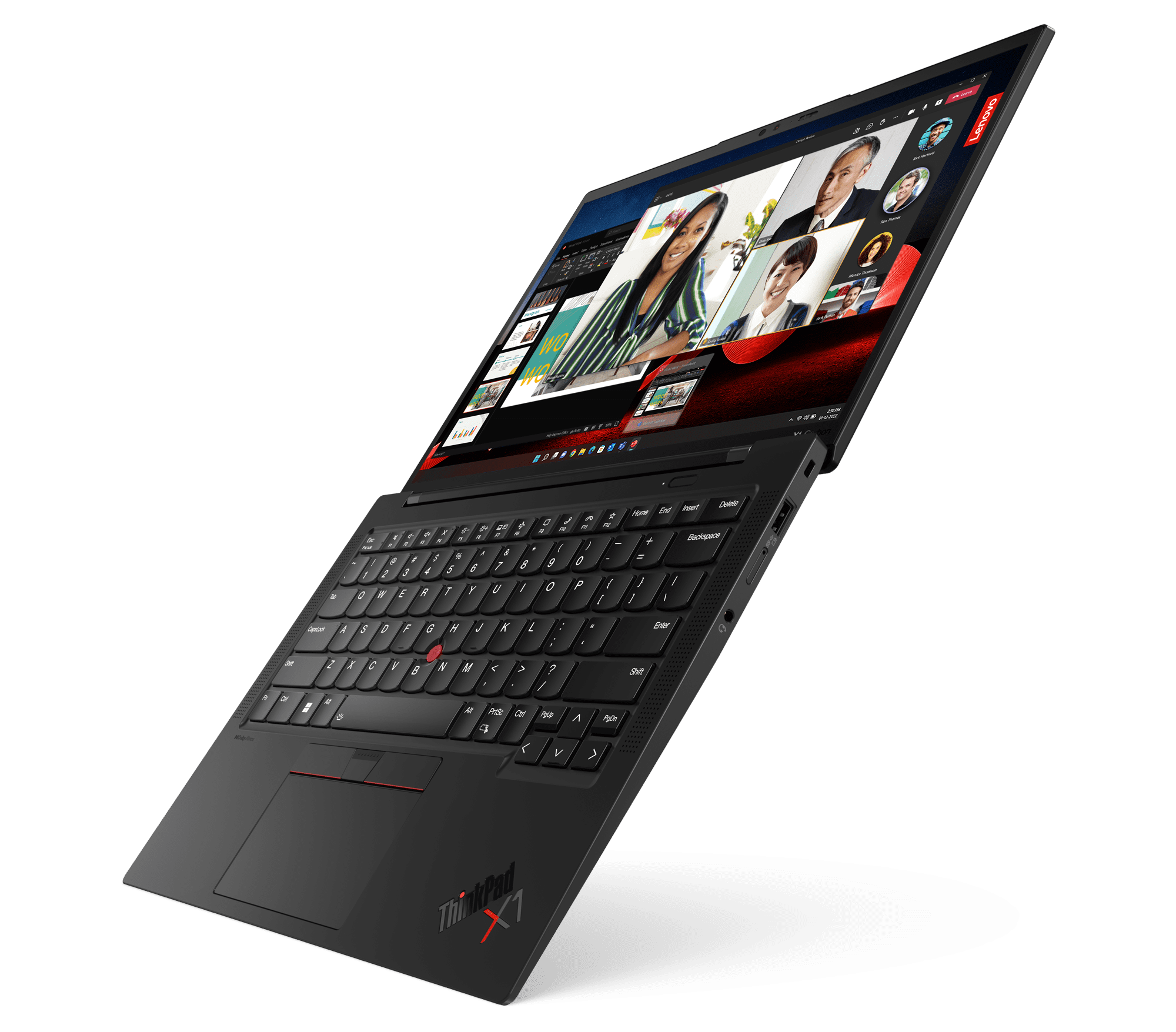 As for the specifications, it is equipped with the latest Intel Core processors, and can be configured with up to 64 GB of LPDDR5 RAM and up to 2 TB of NVMe PCIe Gen 4 SSD. It has an Intel Iris X GPU, Dolby Atmos speakers with Dolby Voice, and a 360-degree microphone for conferencing. 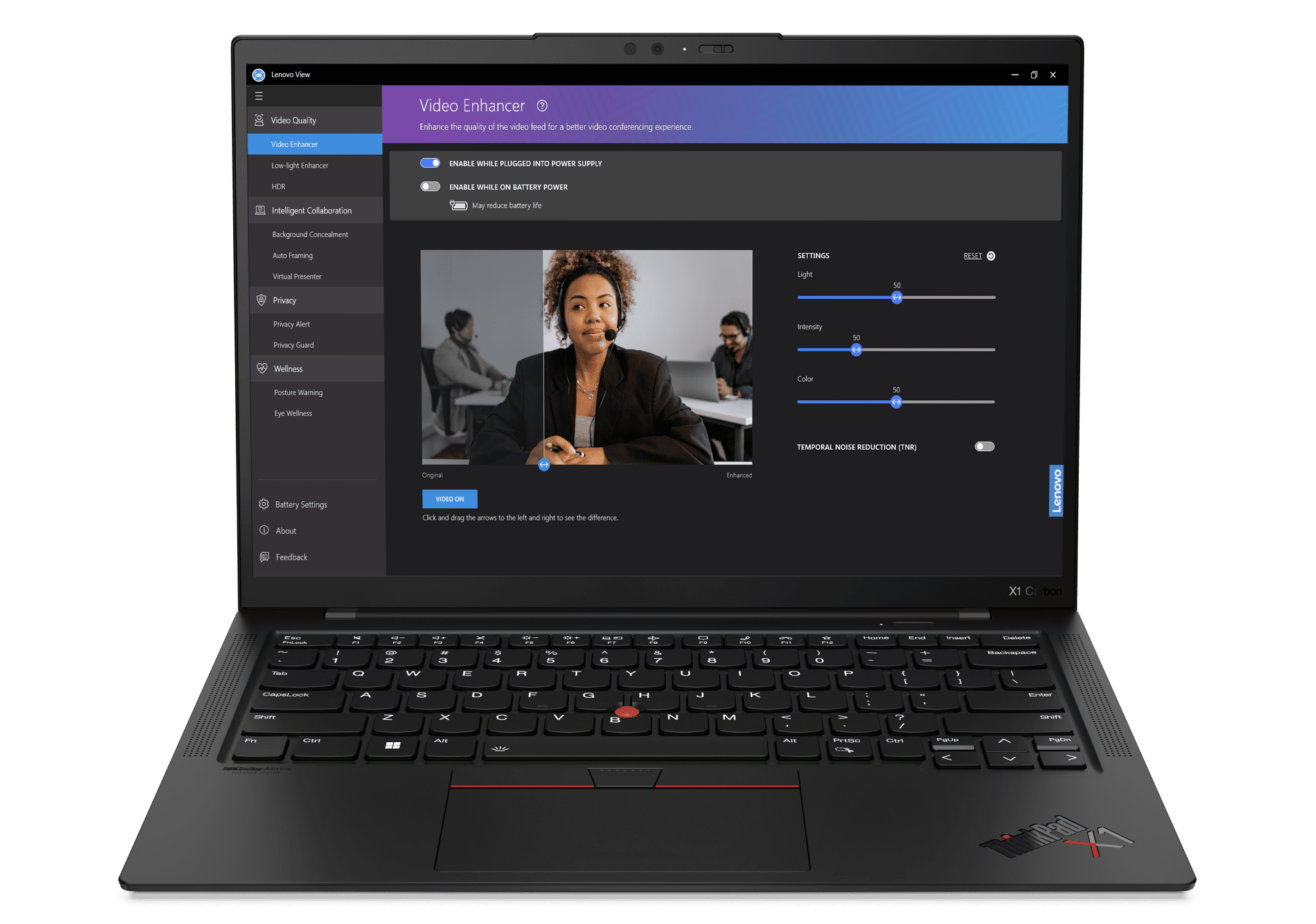 On the ports side, there are two Thunderbolt 4 ports, two USB-A 3.2, an HDMI 2.0b and a 3.5mm headphone jack. The laptop also has Bluetooth 5.2, Wi-Fi 6E, and it also supports 5G sub-6GHz, 4G LTE with eSIM and Nano SIM. The X1 Carbon also has a 57 Whr battery, and a fingerprint sensor integrated into the power button. It is also equipped with a dTPM 2.0 chip and is MIL-STD 810 H certified. Similar to the ThinkPad X1 Carbon, the X1 Yoga has a 14-inch 4K OLED display with 500 nits of brightness, and there is also an AOFT Touch option on some models. The screen can also be flipped and switched to tent mode, allowing users to use it as they wish. The X1 Yoga is equipped with a full HD camera and MIPI IR sensor. The laptop comes preinstalled with Windows 11 and is quite small at 314.4 x 222.3 x 15.53mm. The device weighs 1.36 kg.

Inside, it features the latest Intel Core processors, up to 64GB of LPDDR5 memory, up to 2TB PCIe NVMe Gen 4 SSDs, and Intel Iris X graphics. Like the X1 Carbon, it needs support for Dolby Atmos audio with Dolby Voice and a 360-degree quad-array microphone. The ThinkPad X1 Nano features a traditional, compact form factor. It is thin, light and has narrow edges a modern and homogeneous look. It has a 13-inch display with up to 2K resolution and 450 nits brightness. There is also an AOFT touch option for some models. Like the other ThinkPads on this list, it has a full HD camera and a MIPI IR sensor. The X1 Nano weighs only 0.97 kg and its dimensions are 293.2 x 208 x 14.47 mm.

Configuration-wise, the ThinkPad X1 Nano features a very similar configuration to other refreshed ThinkPads. It is powered by the latest Intel Core processors and features 16GB LPDDR5 memory, a 2TB NVMe PCIe Gen 4 SSD, and Intel’s Iris X graphics card. On the battery side, it is powered by a 49.6 Whr battery. 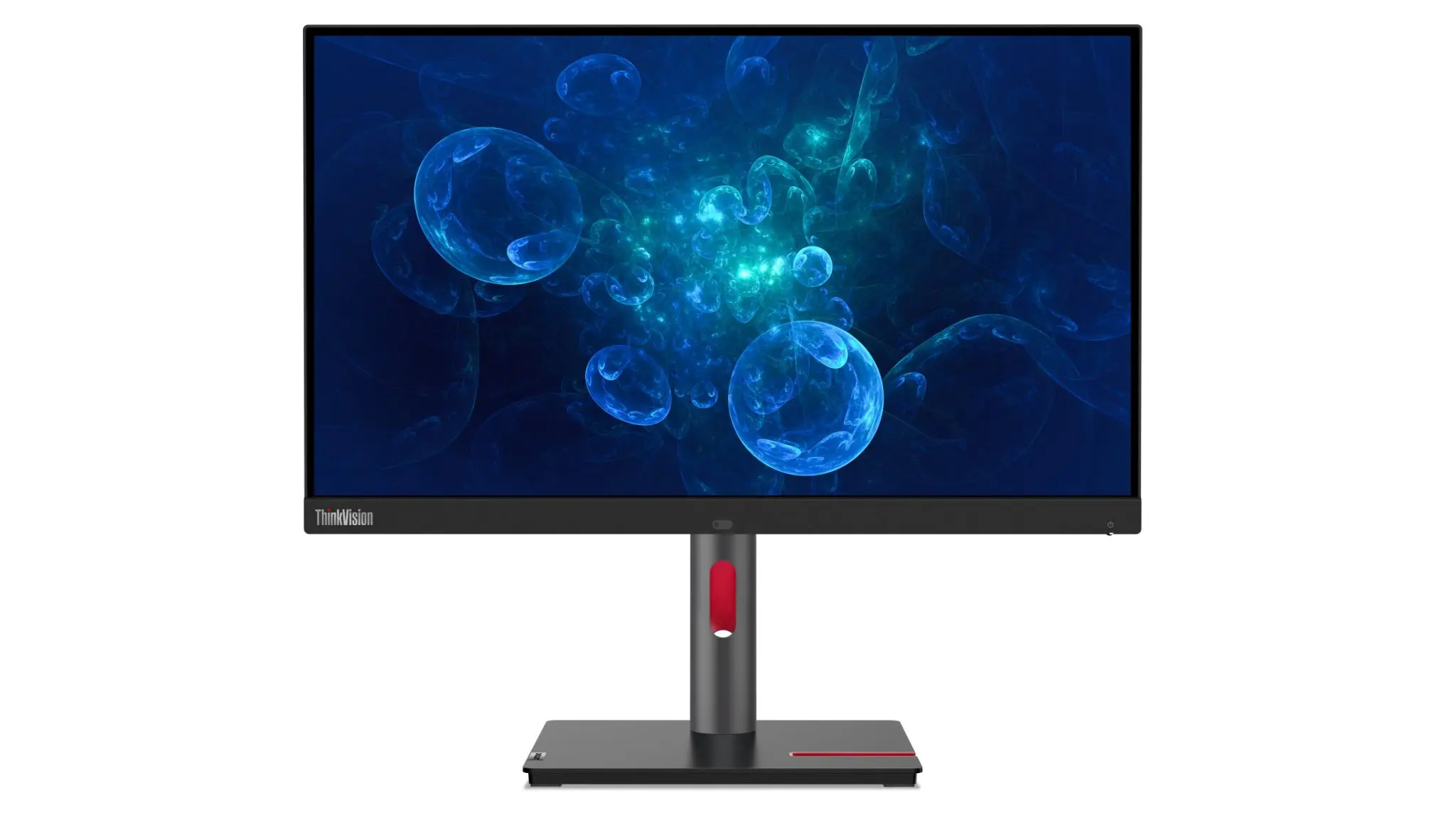 The The new P-series monitors are equipped with mini-LED screens, which support 1,152 dimming zones. They are available at 27 and 31.5 inch screen sizes and supports HDR10 and HLG formats. They are also DisplayHDR1000 certified and reach a maximum brightness of 1200 nits. Lenovo says both of these monitors are great for creators because they incorporate DCI-P3 and Adobe RGB standards and feature anti-flicker technology to reduce eye strain.

Lenovo’s ThinkColours software makes it easy to configure and manage colors, and can automatically dim the screen when the user leaves, and adjust screen brightness based on ambient light.

The new monitors can also connect to USB-C or Thunderbolt-enabled laptops, smartphones and tablets, delivering up to 40 Gbps of data and video transfer over a single USB4 cable. They also support 4K monitors, and can provide up to 15W of power to smartphones and 140W to other devices. 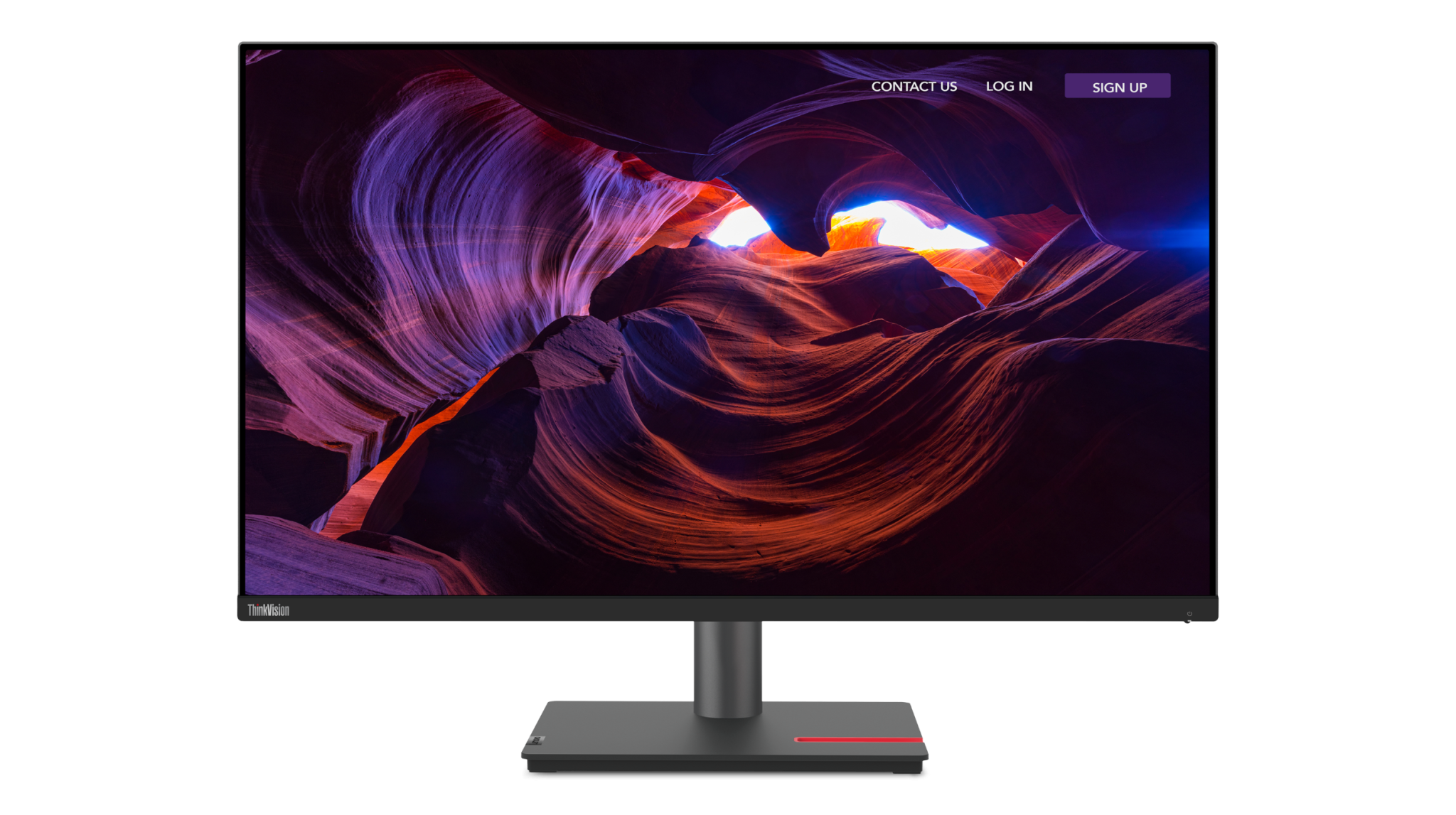 The monitors offer three USB Type-C, four Type-A and two HDMI 2.1 ports, as well as Ethernet and DP ports. Lenovo says the stand is made of 90% PCC aluminum, 95% PCC ABS for the back cover, and 85% PCC ABS for the frame and stand, to reduce waste and be more environmentally friendly. 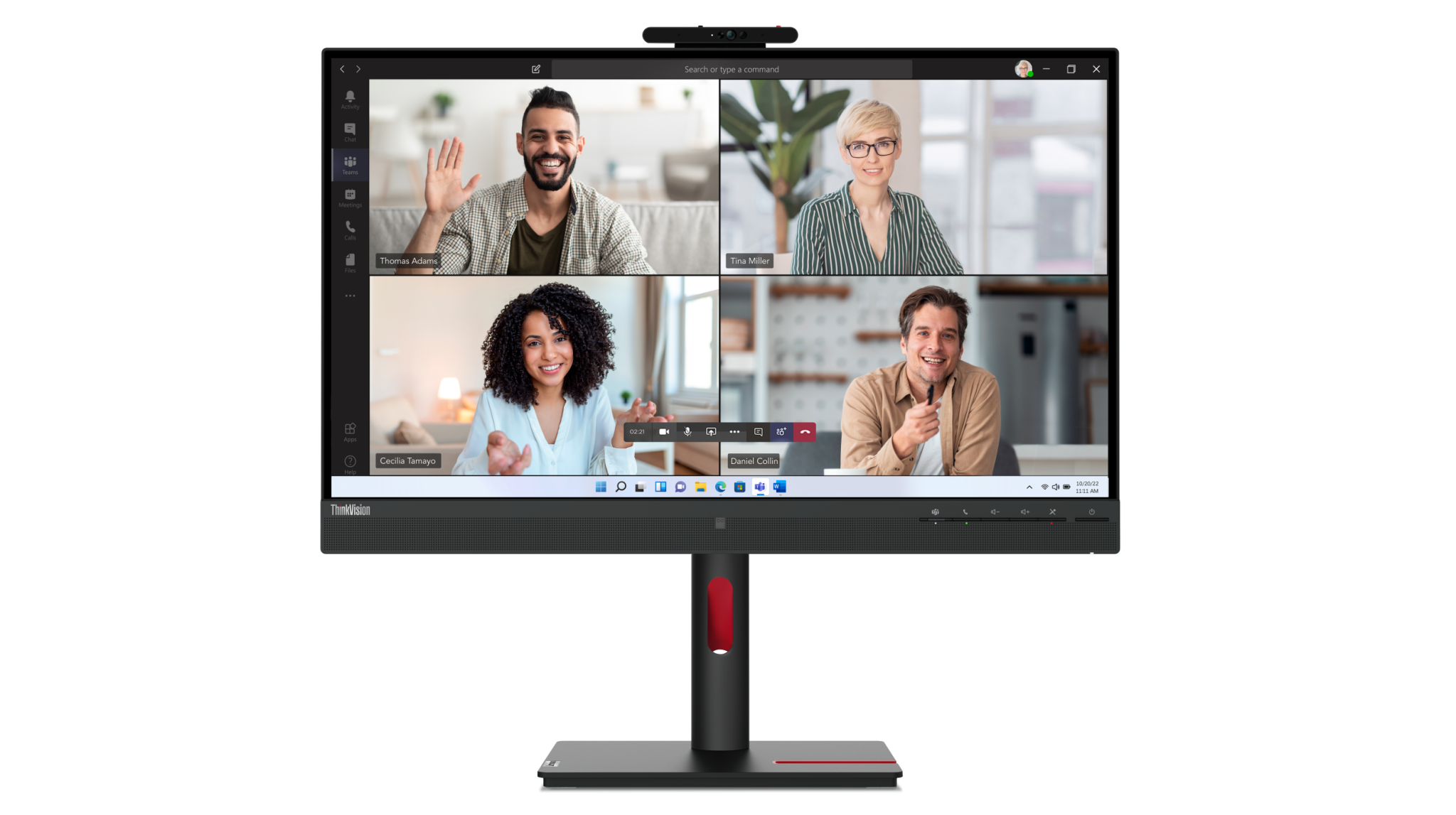 The new generation of VoIP monitors includes a dedicated Microsoft Teams button that instantly launches the application, helping users jump straight into conference calls with just the push of a button. These monitors also support Windows Hello for a more secure login option.

Lenovo says these monitors also feature a traffic light that can turn red when the user is on a call or spends too much time in front of their screen. There is also a distance warning to alert users when they are too close to the screen. There are also “human and light detection sensors” that can automatically adjust the screen based on blue light.

Those who work in front of a dual-screen setup will likely appreciate this new behemoth. The new ThinkVision P49w-30 is an ultrawide, and it measures 49 inches diagonally.. It has a QHD IPS panel and offers a contrast ratio of 2000:1. It has 13 ports, including docking functionality with two Thunderbolt 4 ports with up to 100W power delivery, and a front-facing USB-C port with 15W fast-charging capability.

The monitor supports a wide variety of desktop and laptop computers, and Lenovo claims that it’s a perfect device that can serve as a 2-in-1 solution, without having to deal with all the cables. The monitor can also switch between two PC sources, which is done with the click of a button. The True Split feature also allows users to split one monitor into two, allowing settings and ratios to be adjusted independently.