On the one hand, Samsung will use Qualcomm Snapdragon processors for its next Galaxy smartphone. On the other hand, we hear rumors of a new chip from Samsung for 2025 with an AMD “super” GPU. In the middle, there are doubts about Samsung’s strategy. Who asks: have Exynos chips reached the end of the road?

During its Snapdragon Summit, smartphone chip giant Qualcomm confirmed a rumor that has been circulating for months: future Samsung Galaxy smartphones will be well equipped with Snapdragon chips in Europe. A micro earthquake – and good news? – for the European market, which only has rights to Samsung’s in-house chips, Exynos. In a strange twist, Qualcomm and Samsung have (apparently secret) technology sharing agreements that allow the Korean to partially rely on certain blocks of Qualcomm. The goal is for Samsung to continue to offer great processors in smartphones. A Samsung that was still the first supplier of iPhone SoCs before Apple developed its own chips.

From the perspective of journalists and analysts who test the products, the move to Qualcomm seems like good technical news. Because no matter what Samsung does, its partner’s chips are always on top, both in terms of pure power and in terms of energy consumption. Galaxy smartphones delivered in Europe are systematically a small notch below those found in the USA or South Korea (yes, in its own national market, Samsung delivers terminals equipped with American chips!) The question is always: why only Europe has to have a slightly less efficient processor? A question that is now looming towards a possible “death”, albeit partial, of Samsung’s high-end Exynos chips. Because recent history and the challenges ahead are enormous.

A first abandonment of CPU cores

Samsung has been developing SoCs since the dawn of smartphone history. And even designed custom hearts (customs in jargon) in a dedicated R&D unit in Austin, Texas (USA). In November 2019, Samsung must face the truth: the work provided by this team does not make it possible to make a difference compared to the original plans provided by ARM. Samsung has failed to offer chips better than Qualcomm, and is often behind it. Faced with the impossibility of these engineers to do better than the ARM reference design, Samsung decided to close the unit.

A few months before, the Korean firm announced a partnership that was surprising because it was attractive to AMD. It is in the plans of the American GPU, which was (and still is!) on the rise, that Samsung has indicated that it is based on the next generation of GPUs integrated into its mobile processors. And as the months passed, people salivated even more over AMD’s RDNA technology: we learned in the spring of 2020 that both the Xbox Series and Playstation 5 will use this RDNA architecture (in version “2” in the case of consoles living room ).

The AMD GPU hasn’t (yet?) made a difference 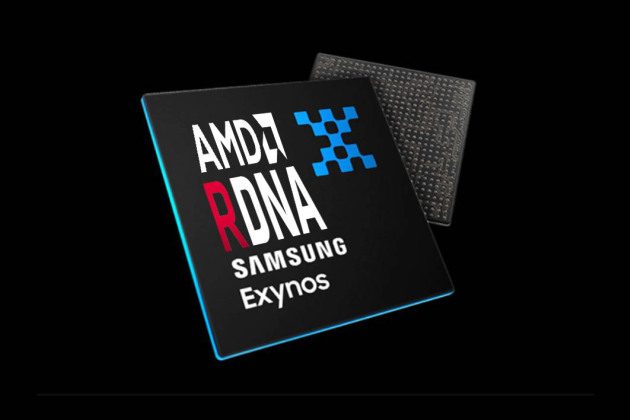 If AMD began to seriously threaten Nvidia in the PC and control all home consoles, its first cooperation in the field of mobile GPUs did not cause the expected “wow” effect. The Exynos 2200 powering the European Galaxy S22s really struggles in comparison to the Snapdragon 8 Gen 1 and, a fortiori, the Gen 1+.

According to an analyst we spoke to at the Snapdragon Summit who wished to remain anonymous, “ the fact that AMD’s GPU cores are the basis of high-power cores makes it difficult to run a change to low-power cores. “A view shared by Qualcomm engineers when asked if they will be able to really increase the graphics power in their future computer SoC: “ In addition to Oryon, our GPU will scale up because our architecture is very scalable* and so it’s easy for us to add cores and scale up.” The x86/ARM battle proves them right: it’s easier to start with a low-power architecture and then scale up than the other way around. If today we can find ARM processors in computers and supercomputers, x86 has never found a place in the world of mobility.

The impossibility of even matching the Qualcomm chip, especially in 3D, is a total snub for Samsung. For the unit that designs the SoC, for the one that manages the partnership with AMD, but also for the one that manages the manufacturing. Samsung’s 4nm was found to be less efficient than TSMC’s 4nm. So Qualcomm changed the dairy for its “+” version as well as for the new Snapdragon 8 Gen 2.

(*: scalable means “extensive”, “scalable” and is said to be a technology that is highly capable of supporting increased power by adding computing units) 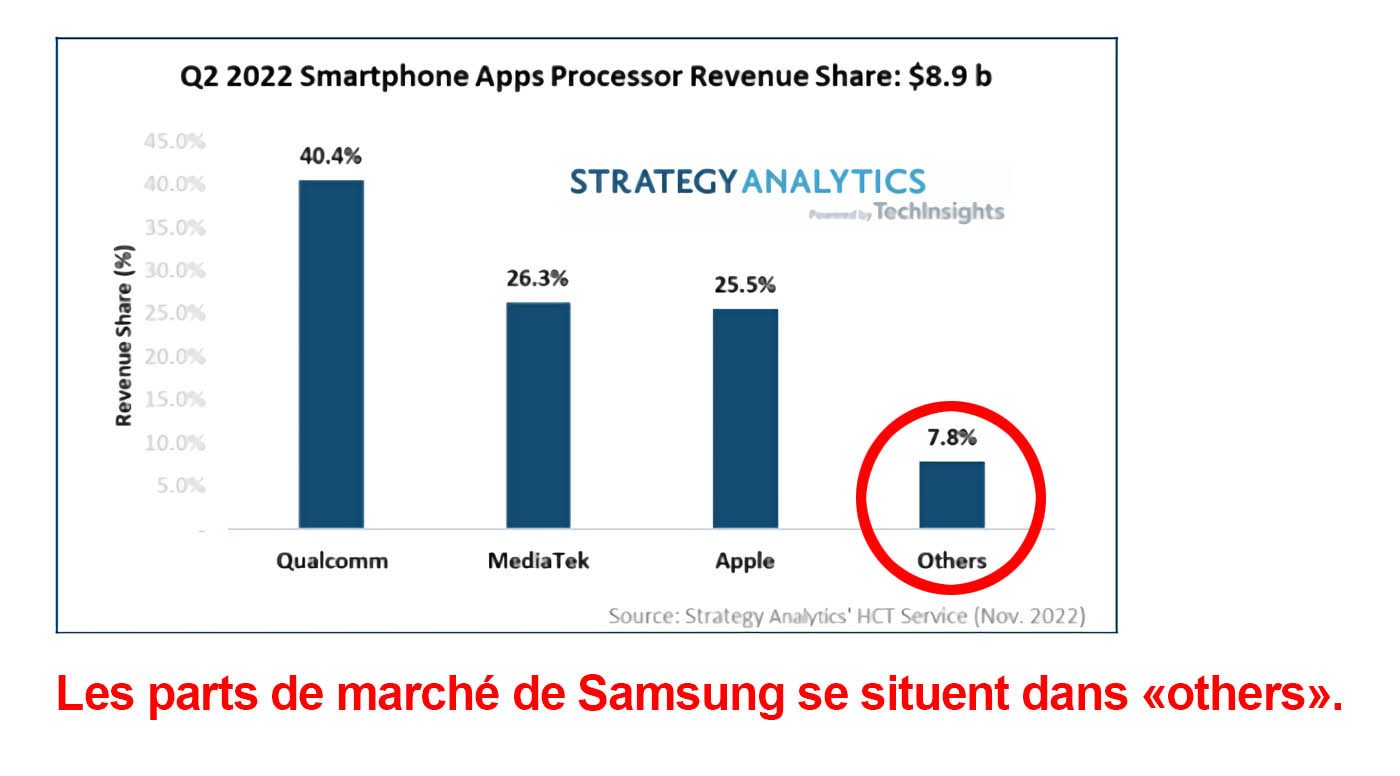 In a complete overhaul of its SoC design division in 2019, Samsung also announced that it wants to change its business model. In addition to designing chips for its own terminals, Samsung has indicated that it wants to sell its Exynos chips to other manufacturers. A strategy that seems to have failed. If the Koreans delivered entry and mid-range chips to Chinese manufacturers, the transplant was not taken. Even the opposite: Exynos’ market share continues to decline.

Here, not only Qualcomm hurts Samsung, but also MediaTek. Taiwanese continues to expand its scope and gain momentum. Taking advantage of its status as an independent chip designer, MediaTek not only makes chips for smartphones, but also for internet boxes and televisions. Markets that have pushed its R&D to very high levels. This allows not only to sell chips for the entry level as in the past, but also for high-end devices of certain brands. Who would undoubtedly prefer to buy good chips from an independent player than a competitor!

Samsung didn’t become the number 1 smartphone by accident and has some great engineers in its ranks. With such a global weight in electronics – Samsung has re-launched its computer sales in many European countries, including France – why is it so difficult for the Korean to design a high-end chip? For several analysts interviewed on condition of anonymity, Samsung is paying here for its management system. Many senior positions rotate every two years – and sometimes annually for other profiles. All this without asking too much of their opinion. If the fact of preventing his troops from becoming “encrusted” can be a good thing, this mobility also has negative effects.

Because in the world of semiconductors, the development cycle of a processor is about three years and requires about 10,000 people. A large payroll to manage and move in the right direction for thirty-six months. A huge challenge, one that only a few rare companies in the world meet… and it seems incompatible with games of musical chairs that are too close together.

Letting filter a “return” with “super AMD GPU” by 2025, Samsung seems to be on the nails. If we count the three years to design the SoC from scratch and the inclusion of a better (and adapted!) graphics part, this horizon seems possible. But Samsung has an interest in staying the course and avoiding changing its mind every four mornings. In the pain of graduation, one day who knows, his division has to be closed. And settle for Qualcomm and MediaTek chips.