MAYafter the first promising steps in the electric market through conventional models to say the least, Volkswagen is again trying the neo-retro adventure by relying on the heritage of the famous “Combi”. 24 years after the New Beetle, let’s see if the recipe for the best jam in an old jar still works. 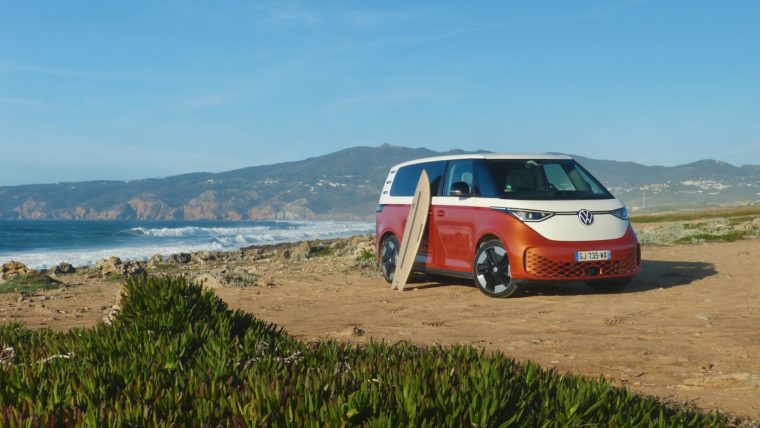 Of course, inspired by the past, but determined to turn to the future, without hesitation. After much hesitation about the rebirth of such an icon, it is in the form of a 100% electric utility vehicle that the Wolsburg firm has finally decided to take the plunge. In addition to the many advantages in terms of design that come with such a choice, it is also an opportunity for Volkswagen to reconnect with the historic architecture of the “Combi” (from T1 to T3) with rear-engine driving. the wheels are both positioned. So, and like any “basic” ID vehicle, the ID.Buzz is pure propulsion. It is obviously based on the “MEB” group platform and is by far the largest vehicle based on the latter. 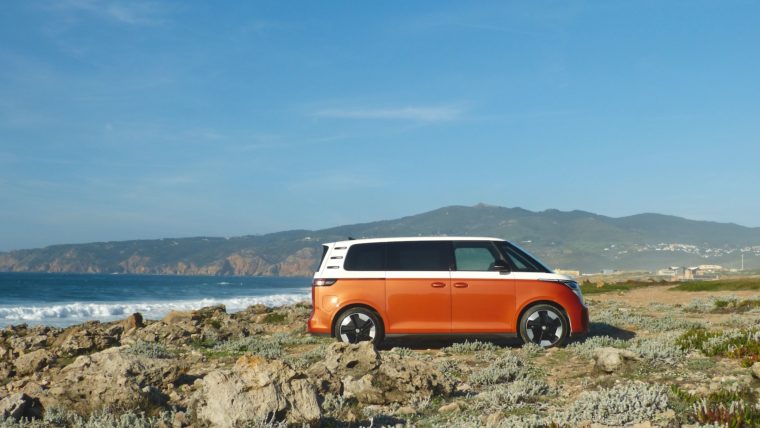 At 4.71 m long and 1.94 m tall, the main asset of the ID.Buzz is obviously habitability. You can easily tell me with a format utility. Today’s masterstroke is stepping on the toes of a clientele accustomed to SUVs, who can no longer find an answer to their need for a rewarding design in minivans, which almost drove them to extinction as well. – immediately within a few years. To do this, Volkswagen has bet big on appearance by offering (as an option, don’t get confused) 4 two-tone combinations: Energetic Orange (which you can see in our illustration photos), Lime Jaune, Starlight Blue & Bay Leaf Green, all four supported by Blanc Candy. This selection is undoubtedly the one that best highlights the stylistic choices made by the Volkswagen Designers, namely: the V-shaped front bonnet, the large front and rear logos, the color demarcation at the level of the passenger door and the 3 dummies on the rear side. tunnels. However, ID.Buzz catches the eye of any passerby like flies. Each photo stop is an opportunity to be met with many positive comments from the curious, not stingy with questions about the machine. 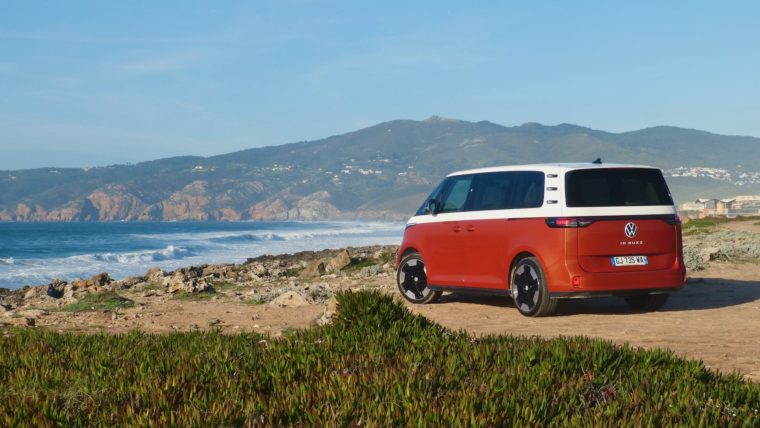 The ID.Buzz is currently only available in two versions ID.Buzz and ID.Buzz Cargo, respectively VP/LCV, both motorized, namely a 204 hp electric motor, we saw in “Pro” versions of the ID.3/4 & 5, associated with a battery with a capacity of 77 kWh that allows an official autonomy that varies between 419 (mixed) and 572 km (in town ) for an ID.Buzz VP . 0 to 100 km/h is shot in 10.2 seconds and the maximum speed is covered at 145 km/h. Honest performance regarding the insane empty weight: 2482 kg. 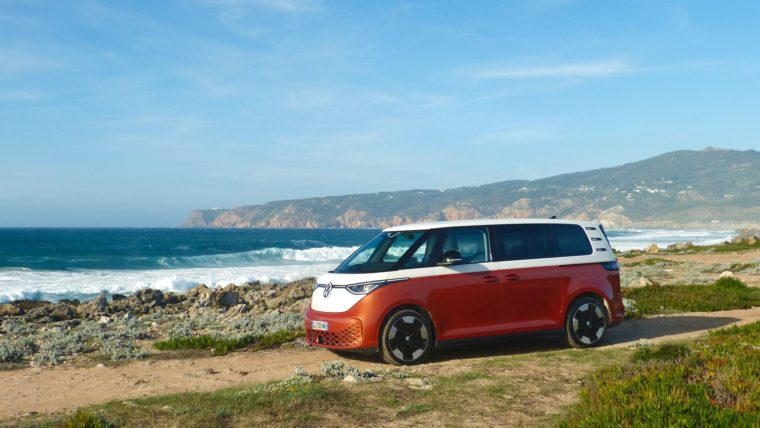 In good utility, Volkswagen did not forget to insist on practical details. Up front, plenty of storage space is available to the occupants: large door bins, chaplain, storage space above the glove box, removable sliding center console, everything to be expected from a family-oriented vehicle. Volkswagen also insists on the eco-responsible side of its novelty: no leather of animal origin and extensive use, especially for the upholstery, of recycled materials. Standard equipment includes 6 USB-C sockets ideally positioned in the doors as well as one located in a dedicated location to the right of the steering wheel in front of the driver. We also see in the mess of front seats and a heated athermal windscreen, automatic wipers, Matrix LED IQ.Light projector, a reversing camera as well as parking assistance and an electric tailgate. In other words, for 56,000 € including tax, we still have a lot of things (and luckily). On the Infotainment side, the ID.Buzz features the Discover Pro navigation system as standard and also offers wireless Apple CarPlay / Android Auto compatibility backed up by an inductive charging module. Voice control is also part of the basic equipment. 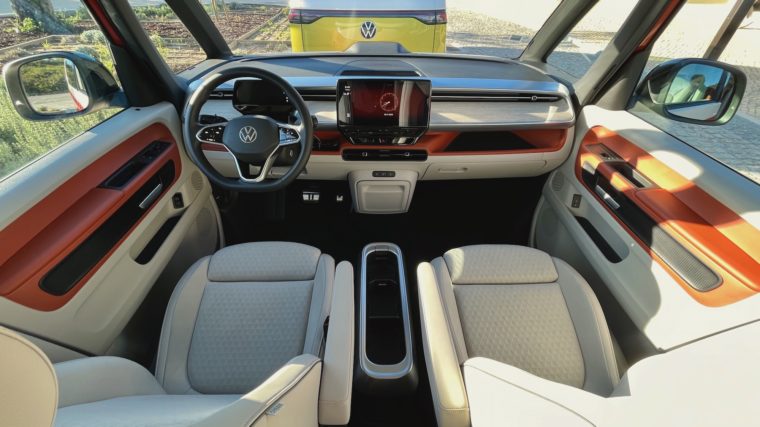 On the road, the ID.Buzz is part of this breed of utility vehicles that are above all else for a car: you will find there the equipment, the soundproofing, the finish, the comfort and above all the pleasure of driving ‘a car . Only the driving position and the impressive size (almost 2 meters wide both) remind you that you are at the wheel of a utility. No surprise behind the wheel, we found the same instrument cluster as the rest of the ID range, a welcome family resemblance to avoid detection as I prepared to leave the center of Lisbon. These first few kilometers don’t present any surprises, either in steering consistency or firm damping but no jitters, but more is possible with our optional 21-inch rim. There is also a particularly short turning radius, made possible by the rear-wheel drive architecture, thus allowing greater steering wheel turns. In use, I would also like to have larger outside mirrors, although in particular parking maneuvers, having a 360 “Area View” camera makes my task a lot easier. 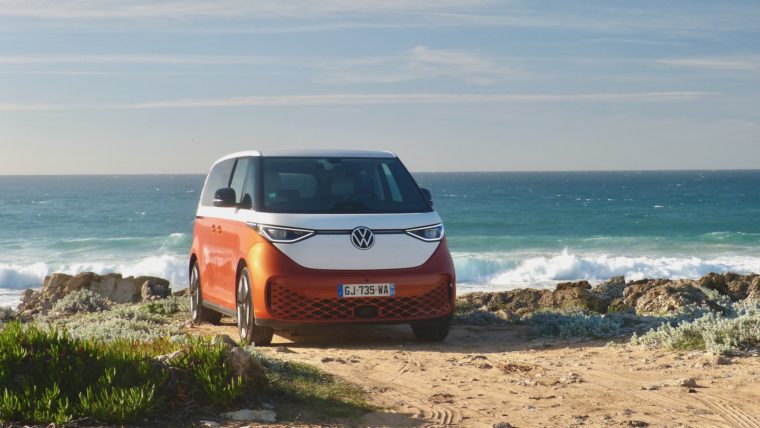 Once we get out of the Portuguese capital, we attack a section of the highway, enough to highlight the road characteristics of the ID.Buzz that invite the senator to drive. Despite an aerodynamics that must be affected by the utilitarian form of the engine, outdated wind noises are made to absent subscribers, as well as rolling noises. The soundproofing has again been completely mastered, essential in an electric car where every noise is heard more. On the other hand, there is no miracle in terms of consumption in this type of course. At almost 2.5 tons in size and brick design, it can easily exceed 25 kWh / 100 km if you don’t use suitable driving. Theoretically, the autonomy then drops below 350 km. The highway remains more than the case with the ID.Buzz, the real pet peeve of electric cars. Even the latter receives up to 170 kW in charging power, thus allowing you to go from 5% to 80% autonomy in just 30 minutes at a suitable terminal. On a suitable course, especially the second network and crossing uncrowded villages, the ID.Buzz nevertheless performs a small miracle which for my part is a remarkable mark of 14.7 kWh / 100 km in average on a course of almost 80 km, enough to theoretically reach 524 km of autonomy. Even on small roads the limits of the ID.Buzz are felt with perfect braking along with a slightly messy pedal feel, the race between regenerative braking and mechanical braking is very long. The final direction is that of a pure utility: a significant reduction and a certain lack of precision in the curve, especially to feel the front axle properly. 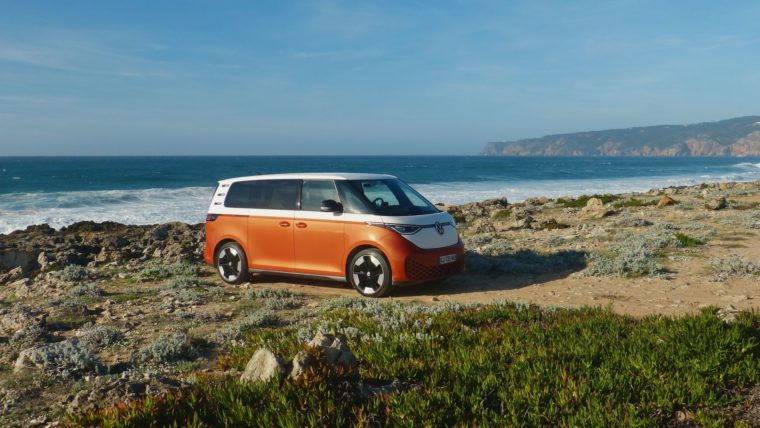 On the positive side, we will maintain smooth services, practicality and above all an appearance that decides everything. However, the autonomy that melts like snow in the sun on the highway, the approximate braking and the heavy weight of the machine may put some people off. However, the ID.Buzz gets points by being without a doubt THE most desirable model in the Volkswagen ID range, at least with the trim options. In fact, the mono-tone outside and inside does not produce the same “retro” effect which is nevertheless undoubtedly the source of the more than positive reception that the public intended for this ID.Buzz . Don’t forget to check the correct options, and extend the check properly accordingly!

For your information, the configuration of our test model is available here or by entering the code N2YRWKTJ in the Volkswagen configurator.