As the last Formula 1 Grand Prix of the season takes place there this weekend, Abu Dhabi has become one of the main theaters of international sport, as evidenced by the latest events that took place there.

If the Football World Cup takes place just 300 kilometers across, in Qatar, the United Arab Emirates is not left behind when it comes to sports. In fact, in Abu Dhabi and more specifically on Yas Island (Yas Island in English), many competitions take place for some time.

Moreover, after hosting the NBA in October, Abu Dhabi has the opportunity, in November, to be the center of 2 major world sporting events at the end of this year: the F1 Grand Prix and the world of soccer.

If last year, the title was played at the Yas Marina circuit between Max Verstappen and Lewis Hamilton, the titles have already been played but there are still more to come. The Formula 1 Grand Prix will take place this week from November 17 to 20. And of course, the party will be there for the closing of the F1 2022 world championship. At the event, many international artists such as Usher, the EDM trio Swedish House Mafia or the grammy winner Kendrick Lamar will be present.

And while the World Cup (November 20-December 18) will take place in neighboring Qatar, Abu Dhabi will be active during this period. Fans will be welcome to tour the venue with a fanzone that accommodates up to 2,000 people daily. Many activities will be set up there (FIFA 23 tournaments, matches broadcast live, food trucks, etc.).

Note that many supporters will remain in the United Arab Emirates during this time. Several daily flights are scheduled to connect Doha and Abu Dhabi, as well as Dubai.

A few weeks ago, the UFC once again settled in Yas Island for a highly anticipated event, UFC 280, including an incredible main event won by Islam Makhachev against Charles Oliveira at the Etihad Arena. . The prestigious American MMA league has been accustomed to living in the emirate since the Covid in particular. At that time, a health bubble was even created with “Fight Island”. This made it possible to continue the nights, which would have been impossible in the United States.

At the conclusion of UFC 280, a boxing match between Dmitry Bivol and Gilberto ‘Zurdo’ Ramirez also took place at the Etihad Arena on November 5. 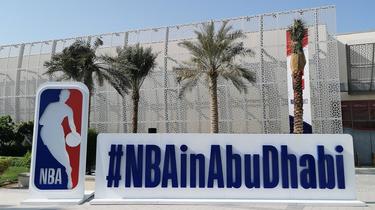 At the beginning of October, this is the big event in Abu Dhabi with the first NBA games (pre-season) in the small emirate. In the program, two games between Atlanta and Milwaukee and the presence of legends such as ambassador Shaquille O’Neal. A success that will surely be repeated in the years to come.

“We are very happy. We have been trying to organize this event for a long time. The process was long but the result exceeded our expectations. Even better. We have wanted to live in the Middle East for many years. Abu Dhabi proved to be perfect for the event. It was really a great success,” said Ralph Riviera, general manager NBA Europe and Middle East.

“It is an honor to host the first NBA Abu Dhabi Games,” said Abdulla Yousuf, director of business development and travel markets at DTC Abu Dhabi. The organization of the matches confirms Abu Dhabi’s status as a global tourist destination, with its diverse offer of culture, sports, close-to-nature activities, leisure and entertainment. We are delighted to welcome basketball fans from all over the world to attend the games and experience for themselves the wide range of experiences possible when traveling to Abu Dhabi. (…) Thanks to this partnership, we have been able to share with the whole world what makes Abu Dhabi so special. Early in the year, the Jr. The NBA Abu Dhabi League was also a great success and we are proud to once again be able to offer a rich and interactive program in the NBA district of Manarat Al Saadiyat.”