True to AMD’s promises – and our expectations! – the Ryzen 6800U is the (almost) perfect chip. A processor that is both energy-efficient on the move, strong for everyday work and includes a graphics chip that can run all games without exception. It’s enough to turn any ultraportable into a small gaming machine.

After completing the Asus Zenbook S 13 OLED PC test, we are finally in a position to tell you: the Ryzen 6800U is (relatively) the best processor in the world. Powerful enough, energy efficient, it has few flaws. But above all, it changes the game in terms of 3D with its integrated Radeon 680M chip. AMD promised when it announced its chip in January: the gains in graphics performance are significant. They can actually go up to +100% compared to previous generations of CPUs (Ryzen 4000 and 5000) that used the old Vega architecture. A leap in performance that literally changes everything for the target machines of this type of chip: ultraportable PCs.

Ultraportables have expanded in recent years, once only cut to endure Word and surfing the Net. The screens come out in the eternal 16:9, the equipment improves with a 1080p webcam, the keyboard and the touchpad are the subject of more and more. But 3D performance has never been their forte. And for good reason: it’s impossible to add a dedicated Nvidia or AMD chip. With a thermal envelope ranging from 15 W to 35 W maximum, no dedicated GPU exists to support CPUs that already consume (and lose) all this energy. The tide started to turn in 2020 with the Ryzen 4000s, with the Ryzen 4800U being the flagship. Intel responded with its Xe GPU, which was integrated into Core 11e and 12e generation. But AMD drives the point home with its Ryzen 6000 thanks to an unprecedented performance/efficiency ratio.

The RDNA 2 and the Radeon 680M are game changers 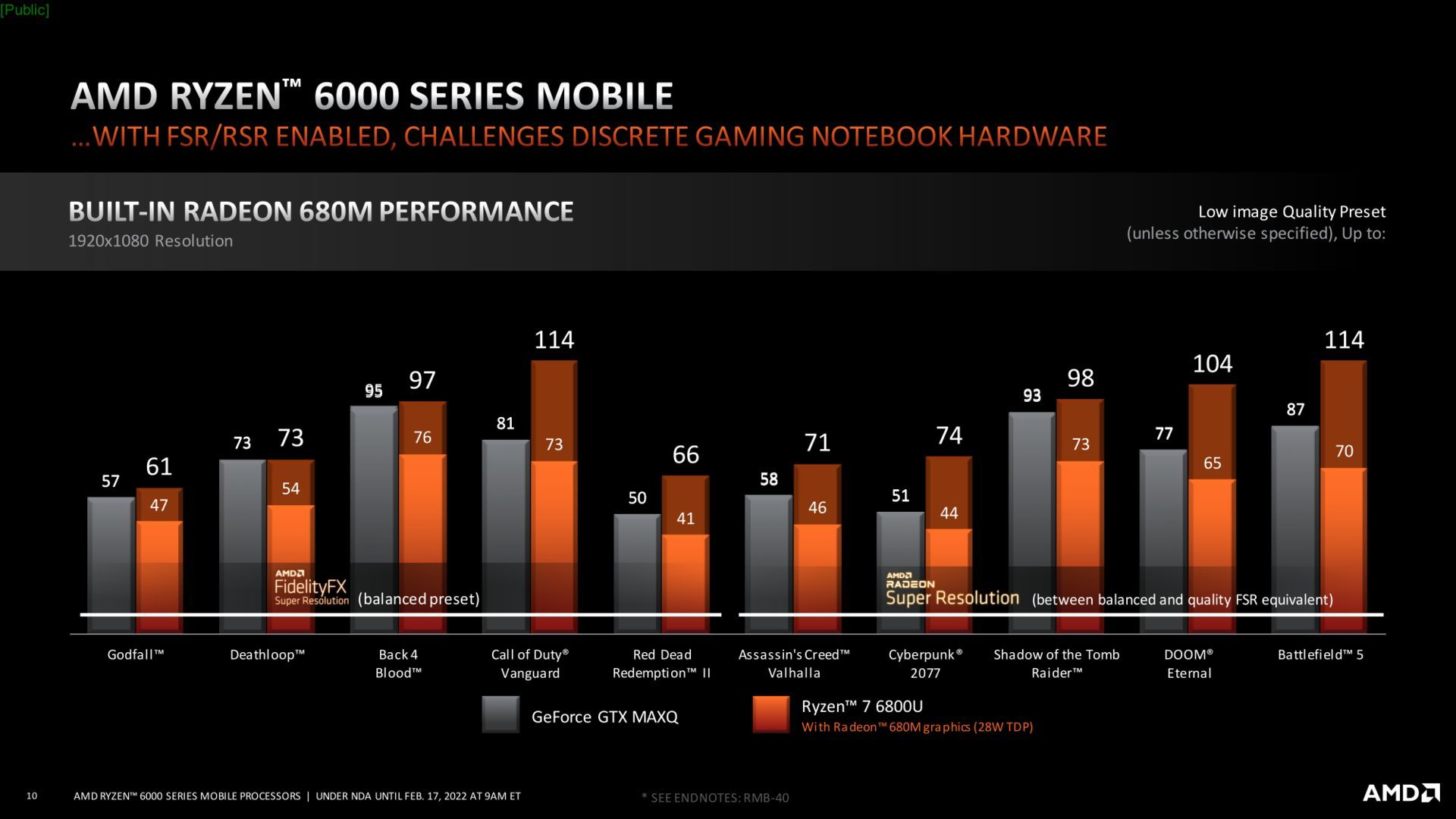 Since the advent of ultraportables, we’ve written this sentence countless times: ” If it is light and durable, the graphics part of its mobile processor will not be able to launch the most demanding 3D games. “. For the first time in history, this sentence is finally wrong thanks to the Asus PC that we told you about at the beginning of the article, the Zenbook S 13 so as not to change its name.
True, integrated chips like Radeon Vega 8 (Ryzen 4000 and 5000) and other Intel Xe (Core 11e/12e Gen) allowed to play most games. But not always in acceptable conditions, the most demanding titles such as Cyberpunk 2077 are beyond the reach of these chips. Because they are at the limit, even below what is actually playable (20 fps and below).

AMD’s processor-integrated Radeon 680M is a game-changer. 12 RDNA 2 execution units is, let’s not mince words, an amazing efficiency. AMD had time to get used to it, as it was the first to develop APUs, which combine CPU and GPU. And its customers are called Sony (PlayStation 4 and 5), Microsoft (Xbox One and Series) or Valve (Steam Deck). This PC in portable console format is the closest use case. In making CPU and GPU, AMD knows how to do it well. But to combine the two, AMD is a champion.

For the first time since we tested ultraportables at 01net.com, one of these machines was able to launch all the games we submitted here. And run them playfully, that is, at more than 30 frames per second. Sometimes there are reductions in definition and detail, but there is always good rendering and an adequate frame rate.
In older titles, such as Skyrim where Sentence (2016), 1920 x 1200 pixels turned out to be cream with a decent level of detail. And some framerates more than 60 fps can be achieved for nervous gamers. Unheard of for this chip that also allows itself to be extremely energy efficient thanks to the excellent Zen 3 architecture. And with more than 14 hours of autonomy in classic use (not including gaming and video playback therefore), the Zenbook S 13 OLED is also one of the longest-lasting machines on our test benches!

No Thunderbolt (because AMD has other fish to fry?)

One of the reasons why the 6800U is not perfect (or rather “complete”) comes, first of all, from the absence of the Thunderbolt standard. A type of “super USB” in USB-C format that transmits up to 40 Gbit / s. Able, in particular, to manage GPUs, external stations and screens very well. This absence on all AMD platforms is 100% to blame. Intel released royalties for Thunderbolt 3 – for 4, it’s a little less clear – anyone can now integrate the protocol without a wallet.

Building multiple product lines and dealing with increasingly compressed development times, AMD is being forced to make choices. And implementing such a controller inside its chips is no small task either. But its lack hurts the ecosystem, especially since given the performance of its mobile chips, external boxes with integrated graphics cards are starting to make sense – especially at a time when the price of graphics card, certainly, is starting to decline.

But more than the Thunderbolt socket, what we blame on this 6800U processor is the… rarity! 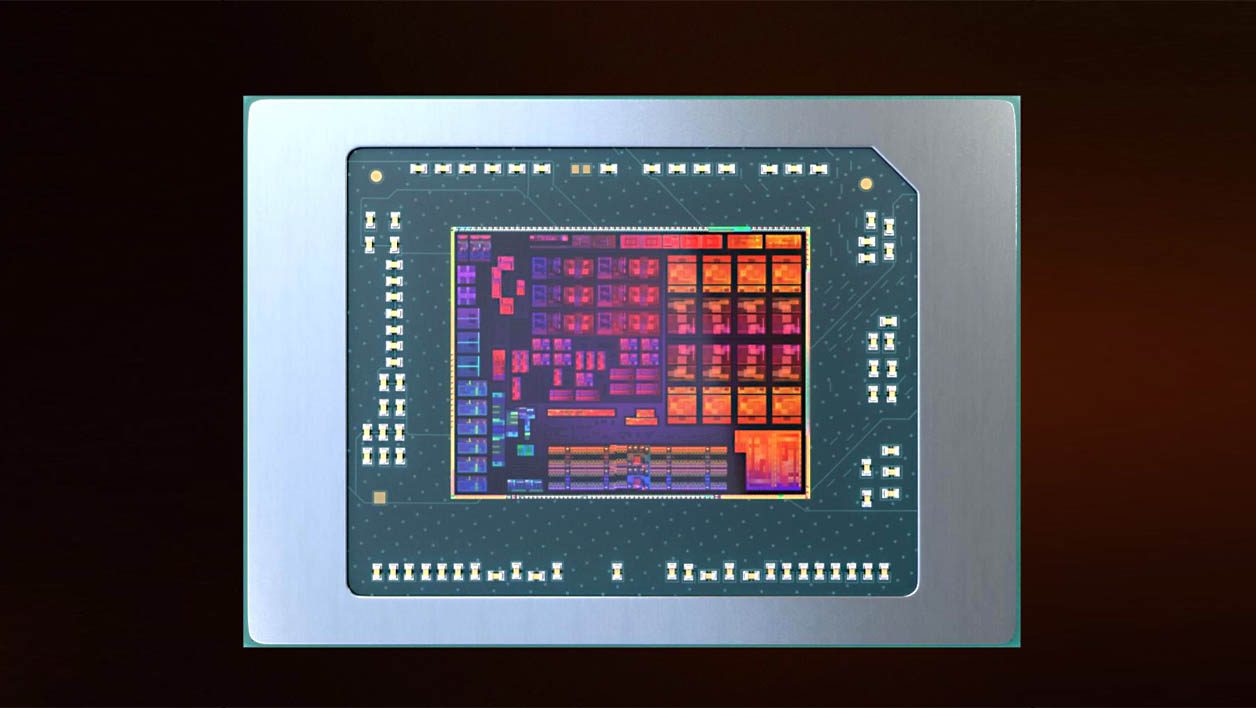 Supply chain lines are hard to get into and it’s pretty hard for us to figure out why this chip is ultimately pretty hard to find. Is it a price issue? First of all, the Asus model we tested is at €1,500 which is on the low end of the luxury ultraportables we test. Is AMD struggling to make its chips? Or did he put the priority of the production lines he pays TSMC elsewhere? It is impossible to have sources, this kind of information is part of the spectrum of “industrial secrecy”, unless you have insider or if AMD is interested in talking, you’ll never know.

Are Intel’s sales and marketing teams working to counter AMD? Certainly, but in general it is quite difficult to draw the legal or illegal contours. Since Intel has already been convicted for anti-competitive practices, they probably aren’t playing “dirty” games. But the “blues” team knows how to make attractive contracts on the platform, help build engines, advertising, distribution, etc. In other words, Intel knows how to do work beyond the simple production of chips. And that could (dramatically) change the game. If AMD has made efforts in the areas of support for the development of engines around its chips, it does not yet have the experience (nor the resources) of the eternal champion.

Whether intrinsic to their internal structure or the way they are implemented, different chip architectures behave differently. If we are talking about CPUs or GPUs, the different technologies are not equal depending on whether they are integrated with low or high power chips. So, some GPUs behave very well at low wattage and others do better when pushed higher. In the case of the RDNA2, common to the Steam Deck’s Aerith chip and this Ryzen 7 6800U, tests showed that below 12 W, the Steam Deck’s GPU is more powerful. But it loses very well and the 6800U goes far beyond 15 W.

In this game, AMD is the best. And not only has he proven it in recent days, but he’s on top of the game… he’s going to last. Because if Intel has come a long way and is launching high-quality dedicated graphics cards for the first time in its history, this is a real challenger in terms of graphics. Even worse, we already know its Core 13 mobile versione generation will include the same Xe architecture as the 11e and 12e Core generation. There is potential for marginal development. This is only from Core 14e generation that Intel will launch a new generation of integrated graphics chips. At the moment, AMD therefore has room for RDNA 2 that offers between 50% and 100% more performance compared to Vega 8 (and therefore Xe, which is more or less par). A perfectly mastered RDNA 2 that will continue to dominate 3D graphics chips for at least 18 months. Before possibly giving way to the newly announced RDNA 3.

What is hope? Two things: chips that stay at a constant TDP – between 15 and 28 W – to always push the performance of ultraportable PCs. And switch to 1080p on cyberpunk For example! But also and above all working to maintain the performance of the Ryzen 7 6800U with lower energy consumption. So that the next Steam Deck is not necessarily stronger, but more stable. To make 10-15 W chips more durable and above all easier to integrate into finer machines. Whether it’s a PC, or “PC/Console” like the Chinese AYA machines, for example. Because after playing with the Asus Zenbook S 13, at Sentence at more than 60 frames per second, we are surprised to say to ourselves “That’s it, this performance is good enough for me for an ultraportable”. What we want is not more fps now: less noise and more battery.