If Renault’s electrification strategy is hard to understand, it’s because the group decided to divide and conquer. Ampère, Alpine, Dacia, Mobilize… We return to recent announcements to better understand what awaits us.

Last week, Renault announced its entire entity dedicated to electrics. It is called Ampère, and follows the creation of the Mobilize brand, which specializes in new mobility. In order to survive, Renault decided to split its group into five entities. 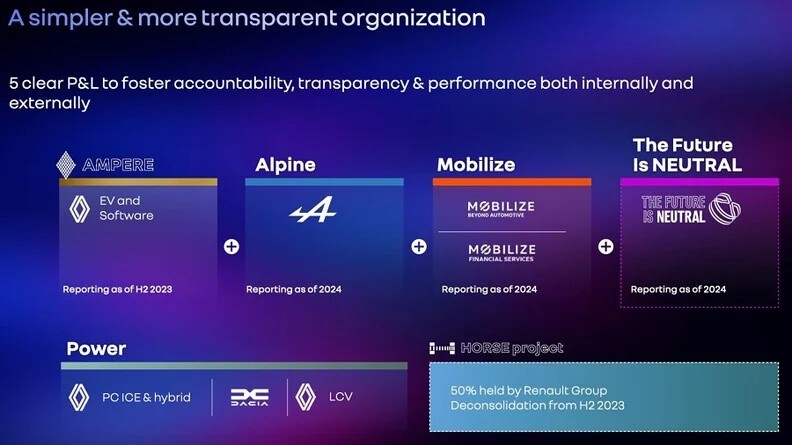 These five entities will have their own financial balance sheet with their own strategy and resources. With this announcement, the survival of the Renault group is at stake.

Here, Renault divides to survive. Currently, electrification is expensive, so the approach is to isolate each entity to facilitate the financial analysis of each of them.

First, Ampère will manage the production of pure electric cars and software development. Among the most anticipated models, without a doubt, are the future Renault 5 and Renault 4 electric. Alongside these models, software will be central to the electrification strategy. That is important for us.

This is why Renault works closely with Google. The diamond brand is already one of the good students, with the latest version of its R-Link operating system based on Android Automotive, with the Play Store and the Google Assistant integrated. We will discover it in the Mégane E-Tech.

In addition, Renault also confirmed that it will maintain its collaboration with Qualcomm to jointly develop platforms based on solutions. Snapdragon Digital Chassis.

It is precisely with Geely that Renault has made an important collaboration. The two groups signed an agreement regarding the Horse project. Through this entity, a joint venture, the two groups will further develop combustion engines.

And electrification in it all?

The Renault group has indicated that all its cars will be 100% electric by 2030. As underlined Clean AutomotiveRenault’s electrification strategy is piecemeal

Renault, through the Ampère brand, is preparing only six 100% electric vehicles by 2030 under its Ampère brand. In addition, Alpine, for its part, only provides 5.

At Ampère, we already know the future Renault 5 and Renault 4, at least in concept form, but also the future Scénic.

As Luca de Meo explained, the aim is to target the compact market. The top of the range will therefore be covered by the Alpine brand, with crossovers that are almost 5 meters long.

Mobilize targets urban mobility with 100% electric cars available as a subscription. First of all, there is the Duo, a revised and corrected version of the Renault Twizy, with high autonomy for the segment.

There is also a Limo, reserved for VTC or taxi use only. Does it look like a Renault? Naturally, due to the tight schedule (2ᵉ half of 2022), the brand dug into the range of its Chinese partner JMCG to find a spacious electric sedan, which is nevertheless the technical base of the Megane E-Tech.

Finally, let’s not forget the Dacia brand, the Renault entity recently changed its look. Dacia will not leave its territory at cheap prices, like a Skoda, and this is undoubtedly one of the big issues of electric. However, the price of Dacia Spring continues to rise.

Renault’s low-cost subsidiary plans to still produce and market thermal vehicles after 2030, the date by which its parent company must switch to all-electric. However, Dacia’s transition to electric has begun, with its Spring launch (which currently represents 12% of orders). The company also released an “electric” buggy concept tailored for adventurers.