A few weeks ago we took the ID.5, the cut version of the ID.4, in its Performance Pro version with a large battery of 77 kWh and 204 hp. An overall attractive model, but with many perfect elements. Today, we go up a notch and control the flagship of the range, namely the GTX version and its 299 hp.

More than respectable power on paper, especially since the 204 hp Performance Pro version instead surprised us with decent driving pleasure for a 2.2 ton car. The GTX version pushes the slider a step further with specific settings and promises dynamic skills.

Aesthetically speaking, our test model’s gorgeous red color, its several GTX badges affixed to the bodywork and its large 21-inch rims set the tone. But apart from that, with some details, a GTX version can be confused with a well-equipped ID.5 Pro or Pro Performance.

In terms of dimensions, the ID.5 GTX measures 4.60 meters, which is two small centimeters longer than the ID.4. 1.85 meters wide (without glass) and 1.61 meters high. Well planted on its wheels, our test model played more bulldozer than ballerina and seemed more inclined to gobble up long stretches of asphalt than spin out of turns. But we will see all this a little below.

Again, if you’ve seen our test drive of the ID.5, you’ll already be familiar with the GTX version’s interior. Unchanged, or almost, our test version was equipped with the “Top Sport” option with integral seats which, it must be said, gives this cabin a bit of cachet if it doesn’t really wrap it up.

We found a GTX badge on the steering wheel, several different materials on the dashboard and colored inserts, in this case red for our test model, on the center console. 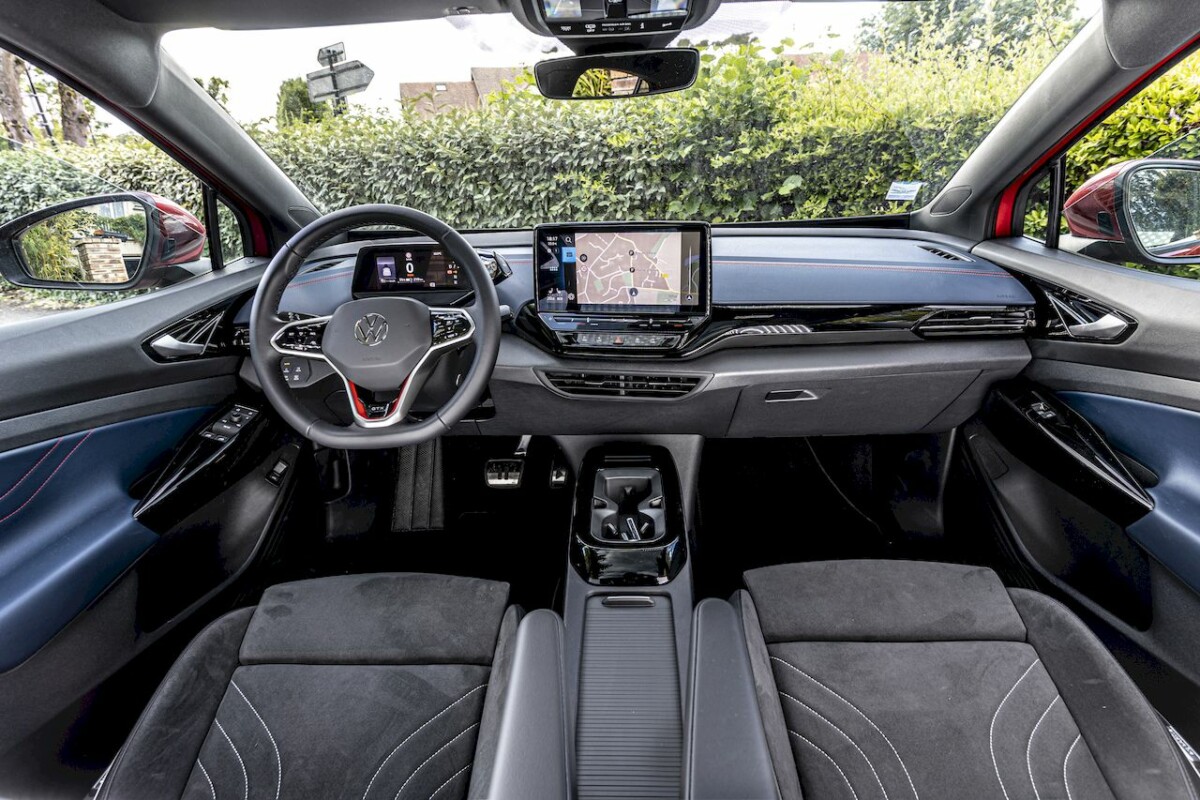 As with the more classic ID.5, we generally see the same characteristics and the same faults. Materials are of good quality for the upper parts, it’s a bit less for the lower parts with hard plastics, but far from being low-end. We feel that investment is more focused on technology than refinement.

In terms of habitability, it’s a copy/paste of the other ID.5, with ample space for rear passengers and good headroom despite the sloping roof and 12 mm lost compared to the ID. 4. Volkswagen has announced a capacity of 549 to 1,561 liters with a double floor that forms a flat surface. There is also a hatch to place a charging cable, and another hatch, under the hatch, to place a second cable.

The GTX version tops the ID.5 range and, logically, we find almost all the best in terms of technology. We’ve already done a broad overview of what the ID.5 has to offer in our first test, with a lot of interesting technology.

We found two screens, a small 5.3 inch under the driver’s eyes and a larger 12 inch, touchscreen, to manage almost all on-board systems. The ergonomics are questionable and lovers of minimalism will be delighted, but in our eyes, by removing so much physical control, it generally hurts the riding experience.

The car features the Discover Pro Max infotainment system, which is obviously compatible with essential Apple CarPlay and Android Auto, available with or without wires. On the front, we find two USB-C ports and an induction charger for smartphones. Volkswagen’s on-board navigation system is pretty good and includes a trip planner that shows available terminals.

We found other very practical gadgets, including a particular augmented reality head-up display, the ID. light; a light strip that provides information by signaling a danger, an upcoming change of direction or the presence of a vehicle in a blind spot by specifically lighting certain areas with specified colors, a connected personal assistant or even the possibility to receive updates remotely.

Driving aids are everywhere, with, without mentioning everything, adaptive cruise control, automated driving in traffic jams, collision warning, automatic emergency braking, automatic parking assistance, or even automatic overtaking on the motorway just by turning on the turn signal. In other words, level 2 autonomous driving. 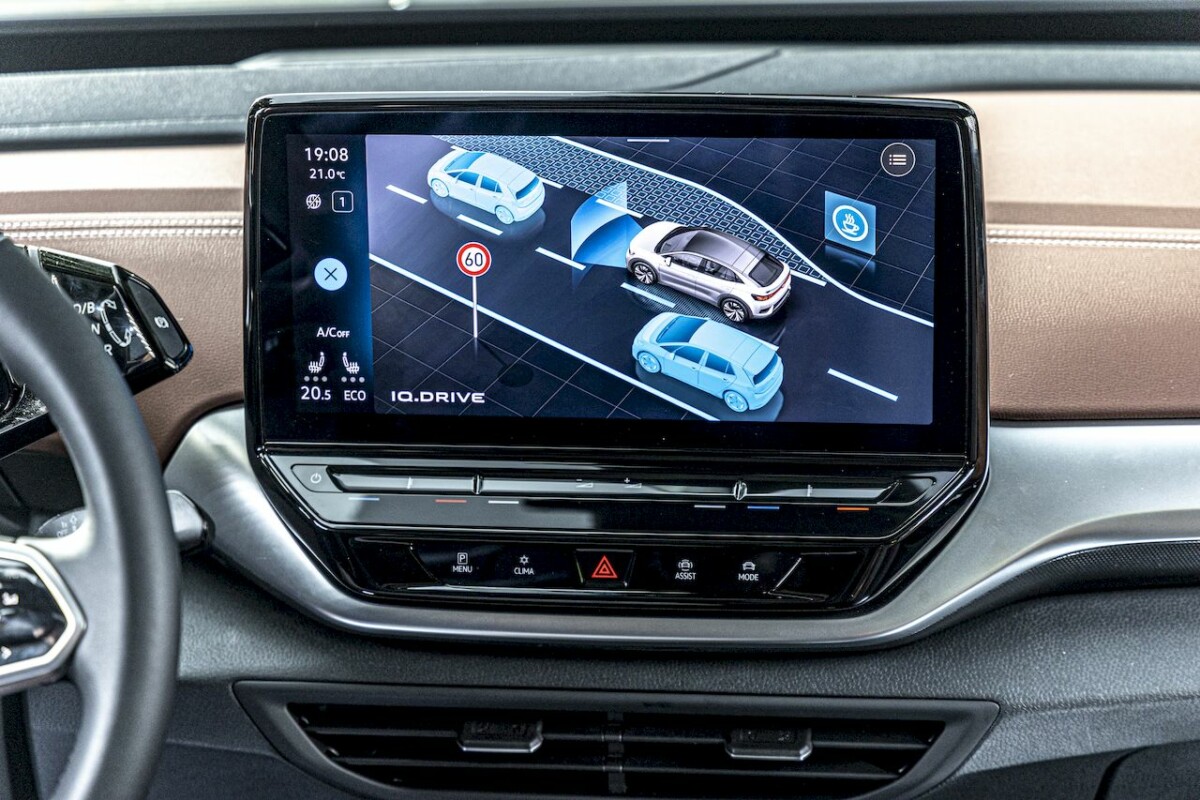 The ID.5 GTX, its niche is sports. After a few rounds, we prefer to use the word “dynamic”, for the most part, because we are generally far from the spirit of the GTI. At 2.2 tons in size, the engineers unfortunately could not perform miracles, although the 6.3 seconds announced on paper to go from 0 to 100 km/h is a good value in absolute terms.

The ID.5 GTX doesn’t feel like it’s sticking to the seat, despite its 299bhp, 460Nm of torque and four-wheel drive. After some far from impressive acceleration, our disappointment was quickly erased by the relatively lively pick-up and flawless motor skills. DCC-controlled damping, adjustable in 15 levels, makes it possible to stabilize the suspensions if necessary in “Sport” mode. What generally well maintains body movements in dynamic driving and chain the wheels without excessive body roll. 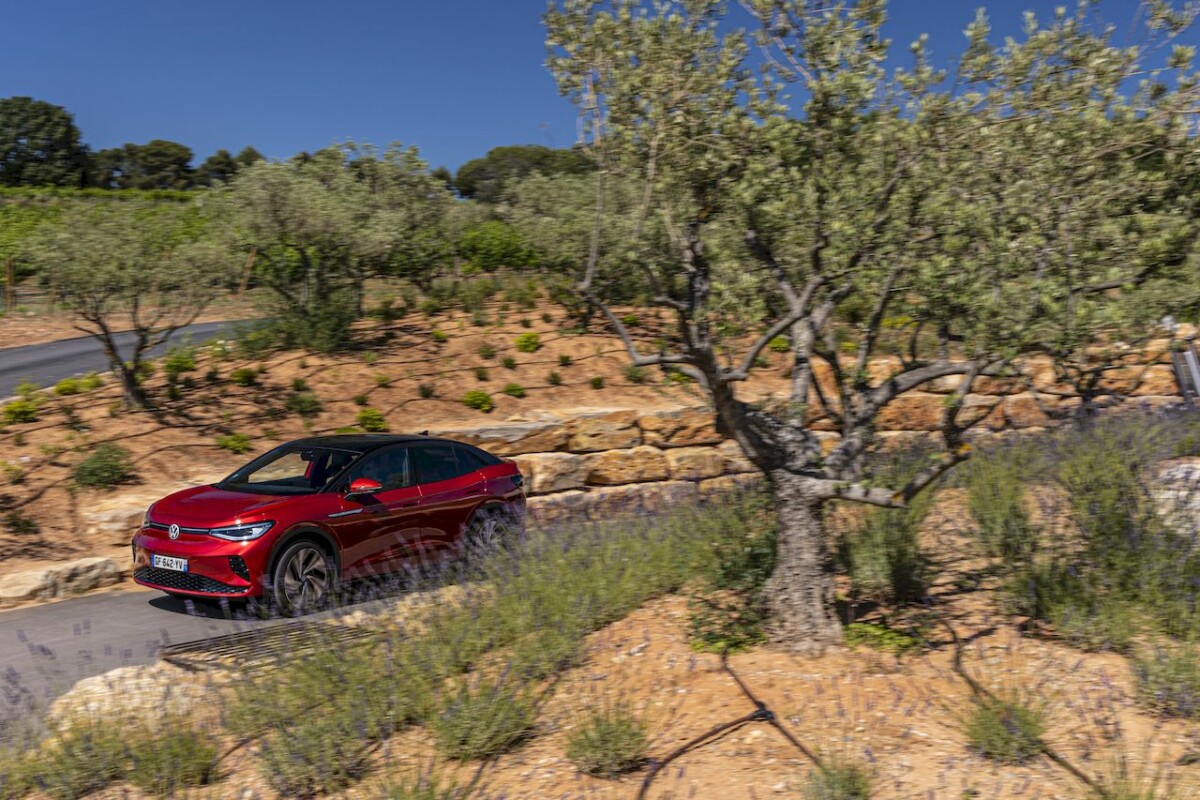 The other side of the coin is obviously that the comfort is somewhat worse. The 21-inch rims don’t help because of a very thin tire sidewall, but neither does the DCC-controlled suspension. In “Sport” mode, slight roughness will return to your vertebrae, while in comfort mode, the suspension becomes artificially flexible with some rebound effects on the rear axle on degraded pavement. Finally, we found the best compromise by placing the DCC slider in the middle, without it being an example of convenience.

Not very sporty, just dynamic, and not really comfortable, the ID.5 GTX ultimately navigates between two waters without combining the two opposing qualities of comfort and dynamism. To make matters worse, the brake pedal lacks consistency, but its proportioning proves surprisingly precise with good management between transitions from regenerative braking to friction braking.

And for those who have urban use of their GTX, be aware that the addition of an electric motor to the front axle affects the maneuverability (which is very good at the base) of the most classic versions, with a turning radius from 10.20 meters to 11.57 meters. 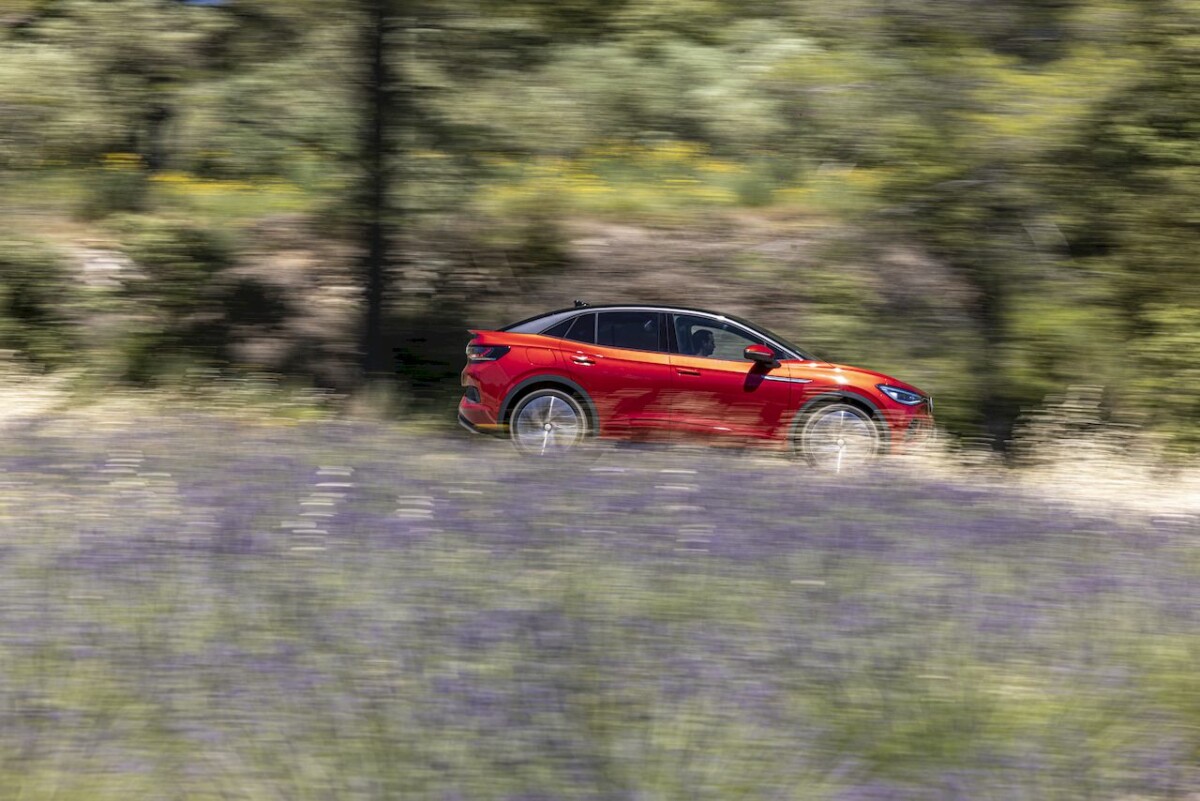 As stated above, the ID.5 GTX is entitled to the largest battery, namely 77 kWh. Autonomy is announced at 489 km, or ten kilometers less than the Pro version equipped with the same battery and claiming 513 km.

In this type of presentation with a well-established course and tight timeline, it is difficult to accurately evaluate autonomy and consumption. We noted an average of 22.5 kWh / 100 km during our handling, used mainly on secondary roads and small winding roads at fairly steady speeds.

Given our consumption, we can expect to do about 330 km on a single charge. By being a little more helpful, we can certainly lower our average and climb beyond the 400 km range to get closer to what the WLTP cycle reveals.

While we were able to charge our trial version of Pro Performance, we didn’t get a chance to load test the GTX version. The maximum DC charge is 150 kW (135 kW in Pro versions), which allows a theoretical recharge of 5 to 80% in 36 minutes, while it will take 7h30 with an AC terminal 11 kW. 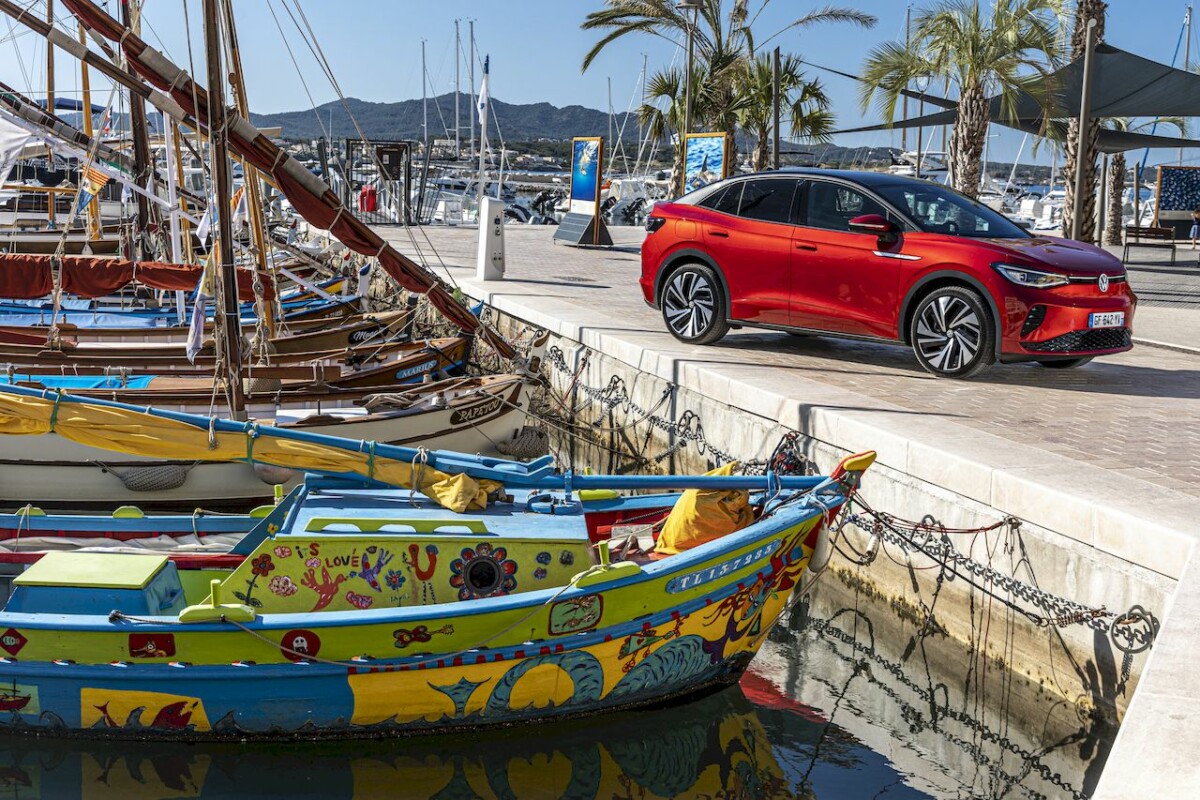 In France, the ID.5 starts at 52,550 euros. The leap forward is huge compared to the call price of an ID.4, with more than 10,000 euros difference. At this price level, the help from the ecological bonus is limited to 2,000 euros. Our GTX version starts at 61,600 euros and therefore does not include bonuses. A price difference between the ID.4 and the ID.5 justified by a more complete standard equipment SUV coupé. Still, the whole is plump for a non-premium model, though standard equipment is interesting with navigation, heated seats and adaptive cruise control.

Competition is mainly internal within the Volkswagen group for the ID.5 GTX with the Skoda Enyaq Coupé RS iV and other Audi Q4 e-tron Sportbacks. However, the two models are shown at a higher price with equivalent motorization and battery.

Among others, we clearly see the Ford Mustang Mach-E, which is more dynamic, with a model equipped with a 76 kWh battery, a 269 hp engine and shown at 65,500 euros in four-wheel drive, ie 3,900 euros more than id. .5 GTX. The Tesla Model Y is shown from 64,990 euros in the Long Autonomy version, and its power is enough to weaken the ID.5 GTX, and that does not even get the Performance model, which is more expensive, yes, but in generally better than many. aspects.