Who remembers? The first Polo in 1975 was a simplified Audi 50. He was so successful that his sister from Ingolstadt quickly disappeared from the catalog. This was when Volkswagen, on the brink of a precipice with the public’s sudden disenchantment with old, rear-engined, wartime Beetles, desperately needed something new. In 1973, the Wolfsburg company poached Audi, turning its subsidiary’s 80 with rings into the Passat. The Polo was important to attract a clientele that was more financially strapped than the Golf, which was launched in 1974. Above all, Volkswagen wanted to compete with new stylish city cars such as the R5, Fiat 127, Autobianchi A 112 , Peugeot 104 Now, 47 years later, we are at the Polo VI and a half, after the last restyling of the sixth version that has refined the front and the stern.

This Polo, along with the Golf, is the most popular of contemporary Volkswagens. Growing up through the generations, it comes in the form of a small wagon that is aesthetically close to its big sister. Result: a balanced car, no frills, typical of the brand’s productions. The bodywork is timeless classic. This beauty that spans the ages does little to help its success.

Inside, it’s just as tight and almost timeless, except for the screen of course. The finish is excellent with well made and carefully fitted materials. The set shows well. And this Polo features better ergonomics than the Golf, lost in the throes of an absurd modernism. In particular, we see a classic gear lever, functional and worthy of the name, instead of the micro-lever that is impossible to catch its elder. The settings are quite simple. We’ll just follow the stupid obligation to click in two different places to defuse the line change alert on every restart. We’ll also include this absurd Volkswagen habit, which reactivates the parking beeps in every reverse gear and systematically attaches them to the camera. The camera can’t stand alone. It’s funny.

Apart from that, we will appreciate the habitability, due to the size. Even the space taken up by the impressive tunnel reduces the number of rear seats to two! The driving position is just right, as long as you want to sit hollow with your knees up. The seats are firmer than the Citroën but the back is more supported. The trunk is not large but adequate for the category. This mini-Golf has all its siblings for the journey. But, on a bad road, we lamented some unwanted squeaks coming from the rear end.

The marriage of the small 95 horsepower three-cylinder engine with the famous DSG dual-clutch seven-speed gearbox is new. At first we were skeptical. Wrong. The whole constitutes a wonderful pleasure. Mechanical goodwill manifests itself after the beginning, which appears rather slowly. The engine then easily climbs the revs with almost unnerving vigor. Increases do not drag. True, on a highway ramp, the power seems a little weak. But, in all other cases, we have nothing to complain about. At least in Sport mode, it’s easy to find with a flick of the shifter which is very handy. It’s simpler and more logical than the wacky buttons of Peugeot and Citroën.

The box is perfectly combined with the engine with speed on the rise and fall reports above the lot. However, gear changes can be abrupt. But nothing serious. We had a lot of fun driving this Polo, with no weaknesses or delays. Almost a sports car, all things considered. 100% manual mode, via the paddles or the old-style floor lever, provides even more responsiveness down low. Rarely have we seen, in recent times, a successful engine-box marriage. Kudos to the developers. In other words, the mechanical balance will be close to flawless, without slow and rough Stop and Start but above all a consumption that is not really economical in daily driving. We swallowed 7.8 liters per cent, a very ordinary amount for a small model. And still often drive on the road or expressway, which does not consume energy. 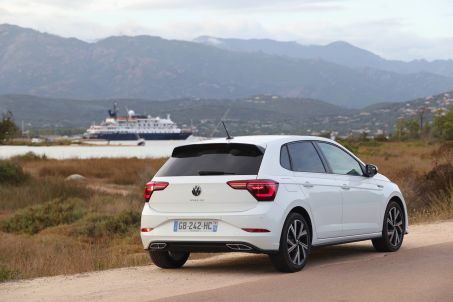 The Polo handles well on the road. In a straight line at high speed as in curves. Well planted in its supports, it does not deviate, regardless of the quality of the coating. It also seems to be insensitive to the weather. The handling adds to the quality of the running gear a great quality of efficiency, without blurring around the midpoint as is often the case with competitors. Dynamism corresponds to mechanical focus.

This small Volkswagen appeals most by its strictness that will never come at the expense of comfort. The car is really rather sensitive to bumps or hollows, even speed bumps. In a small car, such overall homogeneity is unusual. The Polo will be driven as a city car or a small road car, or even motorway. The long journey does not scare him. A real Golf downsized. 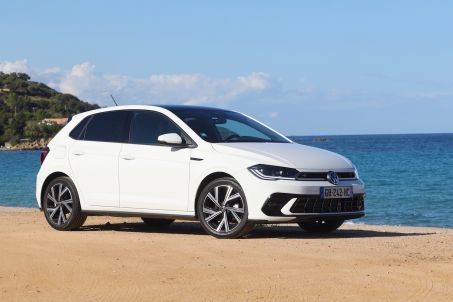 The range starts at 22,660 euros in the Life version, which includes the essentials. The Style provides seats with particularly silky velvet seats but also navigation. Then it is necessary to count 23,810 euros with the manual gearbox, 25,420 with the essential seven-speed dual-clutch gearbox. Although there are no equipment shortcomings here, the Polo is as usual more expensive than the competition.

The Polo and Golf are, in our opinion, the best Volkswagens. Its interesting spaciousness, reassuring build quality, good mechanics to suggest superior power, dynamic characteristics and its comfort make this Polo a great little multi-purpose car. We salute the Volkswagen, which sticks to the reasonable tire fitment, 195-55-R16 with not too low a side that keeps the occupants’ rocks and butts. On the other hand, we will test the impossibility of getting an interior that is not black. Sad! But neither Renault nor Peugeot offers any other option.