When you think of a van that travels the world, you definitely think of a Volkswagen. That’s good: this legendary van came out under the name ID Buzz, all electric.

There is something romantic about van life. The idea of ​​traveling the world behind the wheel of your own home, and discovering new people and new philosophies across towns and villages is always fascinating. But no more than during the youth revolution, the Woodstock festival and the expansion of mental awareness. From this time it always comes out an iconic vehicle : the Volkswagen van. Many collect them, retype them and modify them to make real mobile homes.

But here it is: the time of oil is coming to an end. And at this point, these legendary vans are naturally destined to disappear… Or maybe find a new life? This is in any case the plan of Volkswagen, which decided not to leave its four-wheeled invention in the garage. ID Buzz is the brand new 100% electric van, drawing heavily on his inspiration from his company’s great hippie mistakes while being aware of the challenges of the new world. Discover all its features right here.

The great return of the Volkswagen Combi

You understood: the ID Buzz is largely inspired by the Volkswagen Combi that we told you about in the introduction. Its very rounded lines and its big nostalgic logo on the front are the perfect examples. Buzz ID itself does 4712mm long, 2212mm wide with mirrors, and 1936mm tall. The cabin itself is 1180mm high, with a sliding door opening width of 757mm. All this for a total weight of 2482kg empty, and a total authorized load of 3000kg. 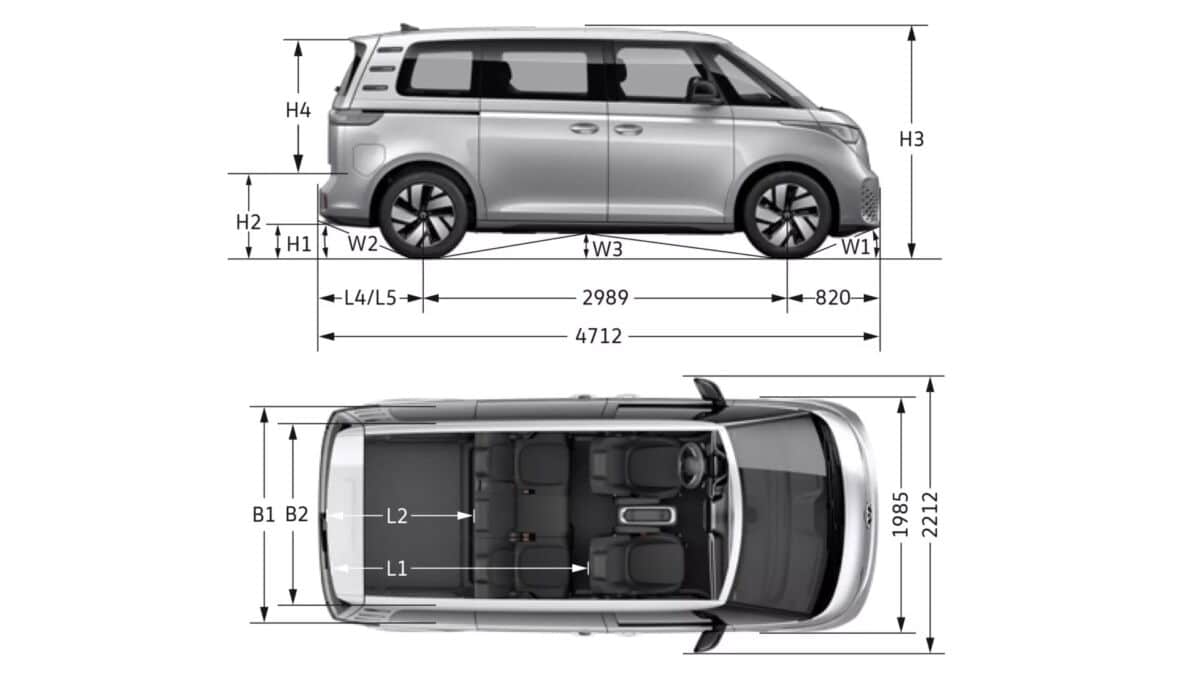 By default, it is a 5-seater that also offers a large storage space. 1,121-litre trunk, or 2,123 liters if you fold the rear seats. On the design side, Volkswagen plays with two-tone with the ID Buzz to remind us more of its famous ancestor, but still more with its options.

The improvements of Volkswagen ID Buzz

The Volkswagen ID Buzz is intended to be a modern vehicle, and thus includes many options in this sense. Plenty of flexible storage space is available inside the passenger compartment, including the “ID Buzz Box” provided as standard which allows you to store drinks and water bottles, sunglasses and anything else. This box is located between the driver’s seat and the passenger’s seat. It even comes with drawers, a bottle opener and an ice scraper. You can remove the box to get back comfort. 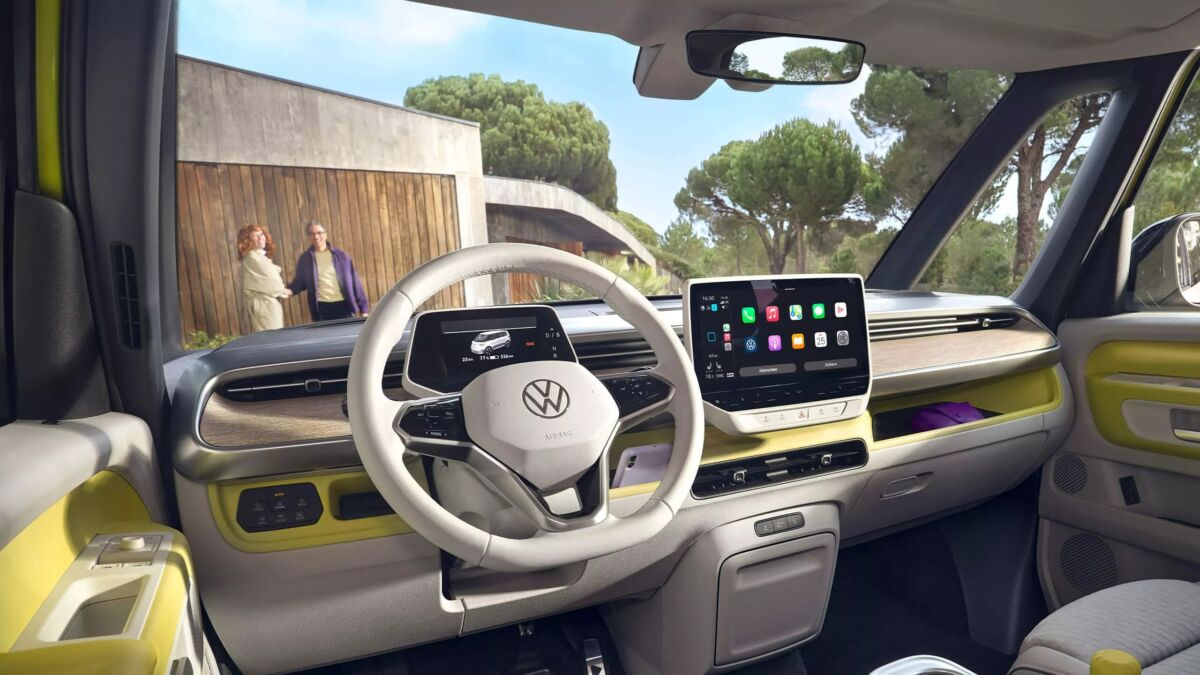 The ID Buzz cockpit is obviously digital. Onelarge 10 inch central touch screen includes standard multimedia system. It easily connects to any smartphone via Volkswagen’s App-Connect app. You also have access to DAB+ digital radio and many smart services via We Connect. As a bonus of USB-C ports, you also have access to a wireless charging pad for compatible smartphones. 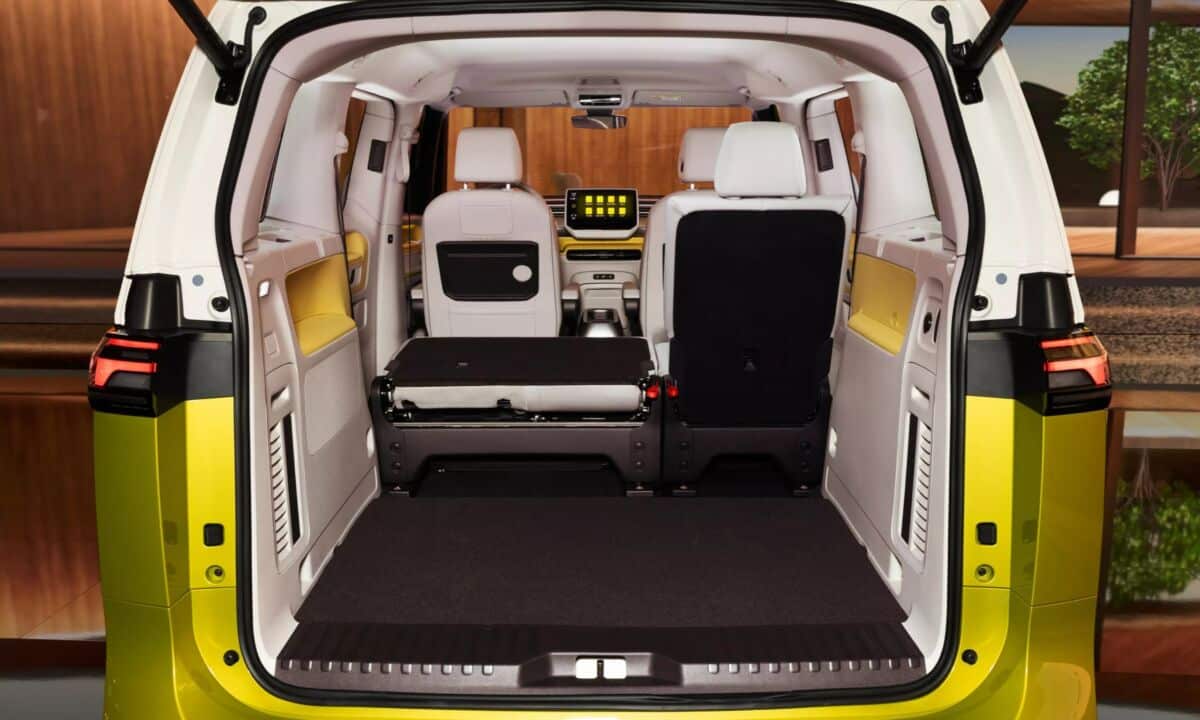 Finally, the environment inside the new electric Combi has been heavily thought out. Besides the optional Matrix LED IQ Light that sees you as you approach the vehicle, you also have an interactive system inside the cabin. Called ID Light, the latter allows you to combine light signals and sounds to create different atmospheres as well as guide the driver as a bonus of the integrated navigation system. Everything was thought to combine practicality with user-friendliness, in line with the philosophy of the original Combi.

As standard, the Volkswagen ID Buzz is always equippeda 77kWh battery consent to him to drive 419km. This battery is associated with a 150kW or 204 horsepower motor. The ID Buzz Pro promises a power consumption of 20.8 kWh/100km with no CO² emissions. Its energy efficiency class is rated at A+++. 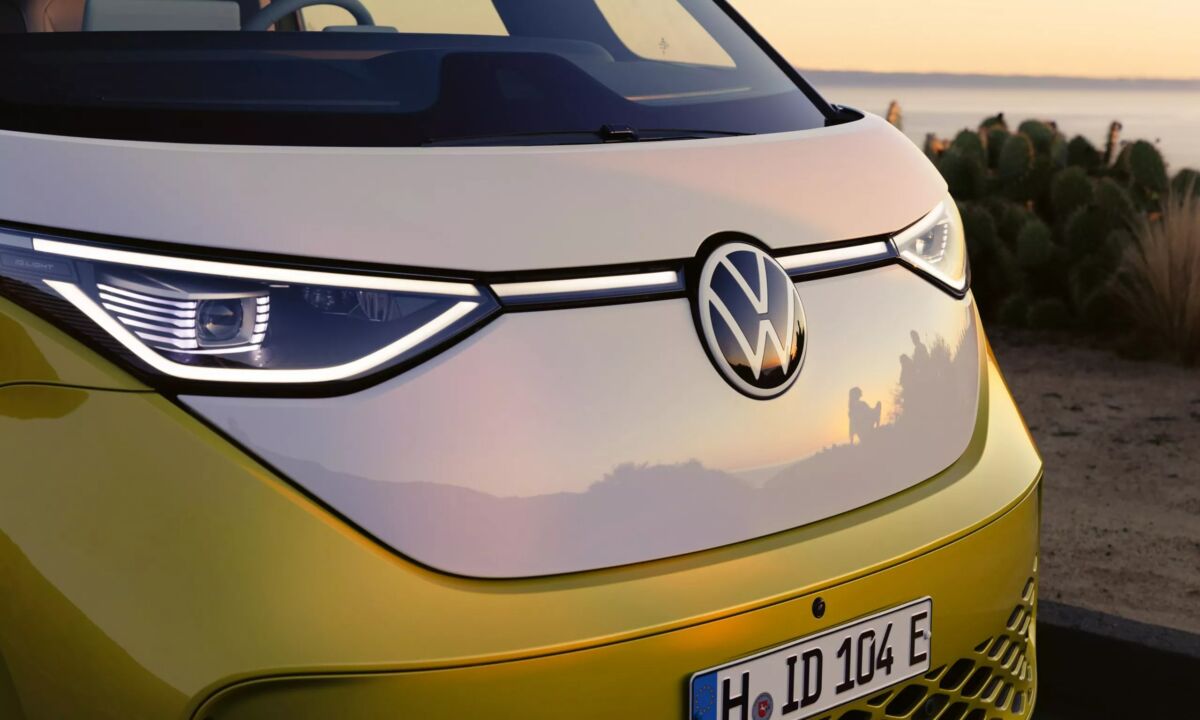 For charging, you can have a home charging station installed. Otherwise, the vehicle supports the Plug & Charge protocol and most charging stations available in the country. The Volkswagen ID Buzz can be recharged with a maximum power of 170kW, but can also take advantage of the maximum standard AC recharge of 11kW. With DC fast charging (as available on the highway), a 5-80% charge will only take you 30 minutes of waiting. 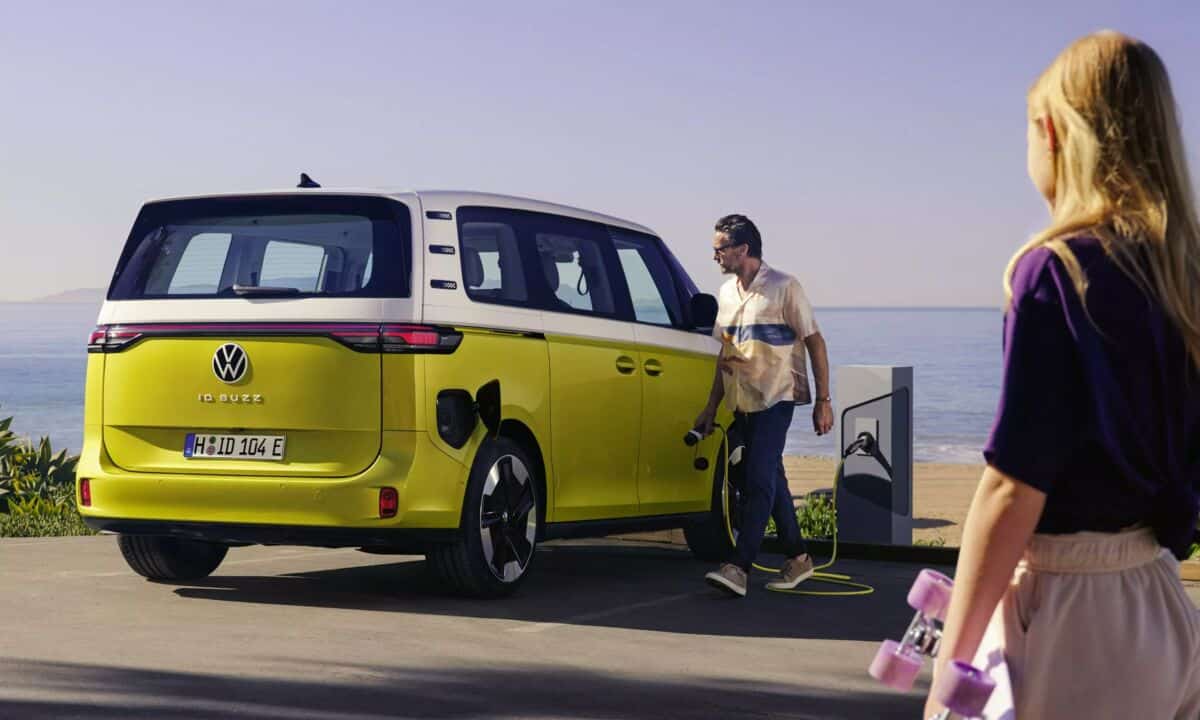 In its ecological approach, Volkswagen has also specified that the ID Buzz is the first vehicle it has designed with full awareness of being carbon neutral by 2050. Therefore, from the entire supply chain to production and use, it seeks use clean energy and act in a sustainable manner.

Volkswagen ID Buzz is available pre-booking now from 56,990 euros including tax for its standard options, including the same motor and the same battery every time. An online configurator allows you to adjust your options as you wish to get the price that suits you best for the best convenience. We don’t yet know exactly when the new Combi will be available next.

The announcements surrounding Buzz ID don’t stop there. The Volkswagen brand has started teasing upcoming models in the same range. For example, we looked at a long version of Buzz ID that could be accepted up to 7 occupants. 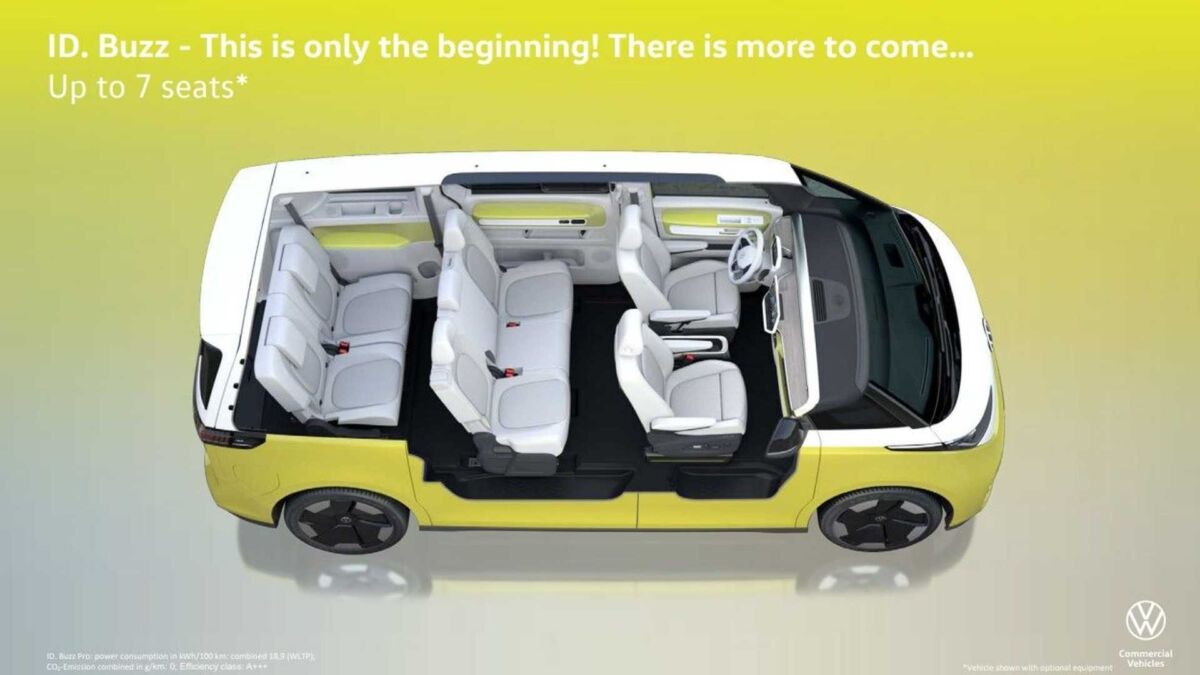 The brand also produces batteries ofthe maximum capacity increases to 111kWhwhich would put it in the same range of Mercedes limos and BMW SUVs. 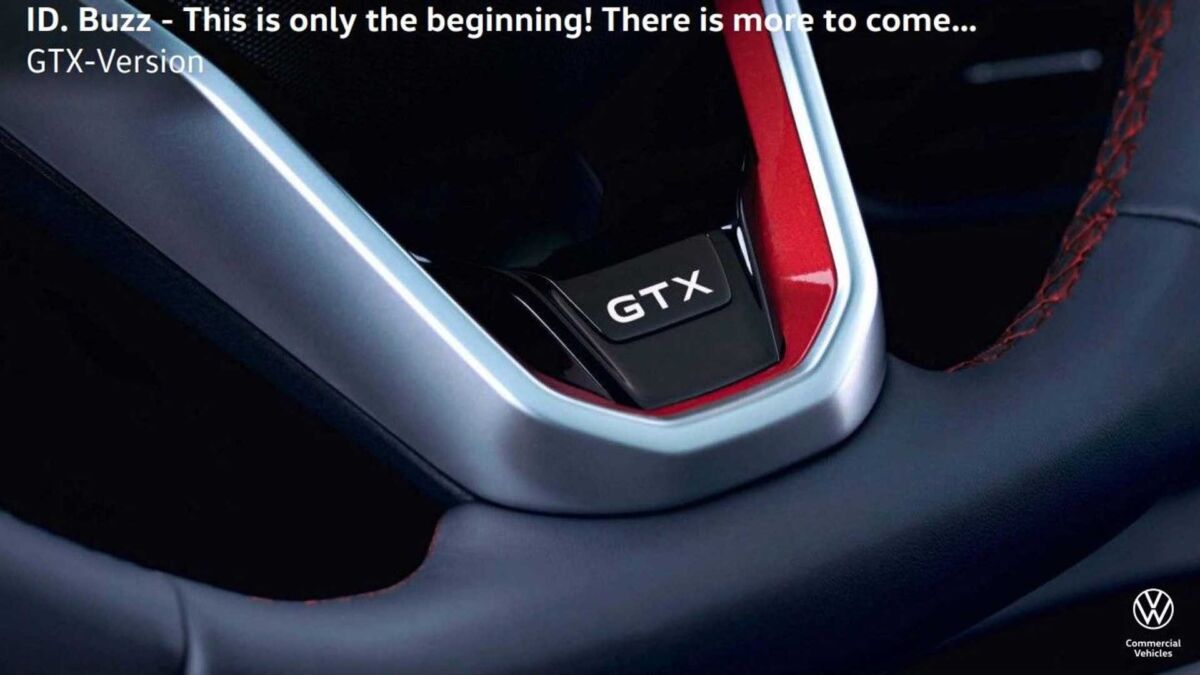 Finally, the brand also teased the arrival ofa GTX version of ID Buzz. Thanks to that, the vehicle may be capable of sportier driving in the future. It is expected to develop 299 horsepower, as is the case for the GTX ID4 and ID5. However, we don’t know when these models will be available.